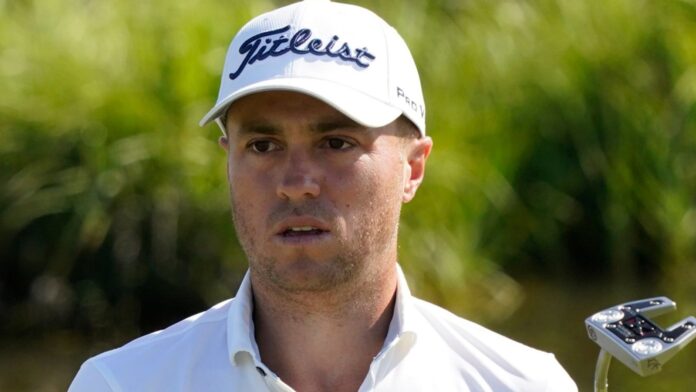 “I just kind of need a little spark to get something going, but unfortunately, everything feels pretty average.” Can Justin Thomas ignite his season at The Memorial? Watch live from Thursday on Sky Sports Golf.

Justin Thomas is looking for a “little spark” to get him back into the form he feels he has showed for only one weekend this season.

Thomas remains the world No 2 despite not posting a top-10 finish since his memorable victory at The Players Championship in March, when weekend rounds of 64 and 68 swept him to a one-shot win over Lee Westwood at TPC Sawgrass.

The 28-year-old was unable to mount a serious challenge at the Masters and missed the halfway cut at the PGA Championship, and he goes into The Memorial this week with his game in “pretty average” shape, by his own admission.

“To be honest, the state of my game is not great,” said Thomas. “I think my play recently has shown that. I’ve not had a very good calendar year, I would say, really just a good weekend at The Players. I played well at a couple of events early in the year, but I just haven’t really had any results to show.

“I’ve been struggling a little bit with my swing and I haven’t been near as consistent as I have been in the past, but I feel like I’m not as far off as the results show and then there’s some days where I feel really far off.

“I just kind of need a little spark to get something going, but unfortunately, everything feels pretty average.”

Thomas is currently ranked one place ahead of Jon Rahm, who arrives at Muirfield Village as defending champion having claimed the title by three shots behind closed doors last year.

The Spaniard is looking forward to hearing the fans rather than the crickets this season, and Rahm is also embracing the challenge of taking on a course that has undergone extensive changes under the watchful eye of tournament host, Jack Nicklaus.

“It’s always great to come back where you’ve won,” he said. “Obviously it’s a very different atmosphere with crowds and people on the golf course, especially around the 18th green.

“Obviously everything we heard last year was crickets, right? There was no applause and no cheers. So it’s a little bit of a different atmosphere. It’s always great.

“I got to see the golf course today and I love the changes. I know Jack is always trying to make this a little bit more challenging for us and he’s definitely succeeded on making the golf course more difficult.

“So I enjoy the changes, it’s going to be a fun week and I feel like there is some advantage to people that have played here in the past, but with all the greens being redone and some of them being completely reconstructed, I feel like everybody starts from the same baseline.”