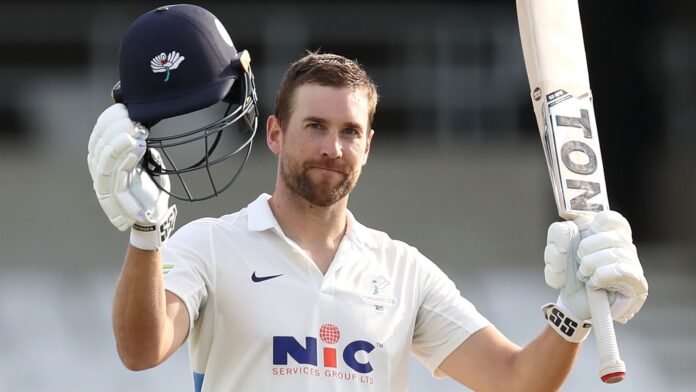 Ibrahim progressed his overnight score of 37 to 55, though centurion Ben Brown (127) could add only one run to his total. Sussex were eventually bowled out for 313.

Malan then somewhat stole the headlines with a sublime century in his first county appearance of the summer, steering Yorkshire to 272-2 by stumps. Gary Ballance too impressed, contributing to an unbroken 177-run partnership with 74 not out.

Elsewhere in Group 3, Glamorgan need just 51 more runs to earn themselves a second win of the season after another eventful day in their match against Lancashire in Cardiff.

Lancashire started the day the happier of the two teams, earning a slender 23-run first-innings lead, but then the visitors collapsed, bowled out for 164 second time round.

Chasing 188 for victory, Joe Cooke (38) and David Lloyd (41) put on the highest stand of the match so far with a 72-run opening partnership, as Glamorgan ultimately reached the close on 137-3.

Current Group Two leaders Gloucestershire are in danger of slipping to a second consecutive defeat after Leicestershire took firm control on the second day of their match.

After seeing their points advantage shrink when they were beaten heavily by Surrey last week, Gloucestershire were bowled out for 158 on Friday, in reply to Leicestershire’s 451, as left-arm spinner Callum Parkinson took 5-45 on a turning pitch.

Only opener Miles Hammond, who scored 67, offered any sort of resistance, while there were three wickets also for Colin Ackermann’s off spin.

Parkinson struck again after his skipper Ackermann enforced the follow-on, picking up Chris Dent caught at slip in the last over of the day – Gloucestershire will resume day three 5-1, needing a further 288 to make Leicestershire bat again.

In Group 1, David Bedingham’s third century of the season saw Durham into a dominant position on day two of their meeting with Worcestershire at New Road.

The competition’s leading run-scorer Bedingham hit a chanceless 121 to take his tally for the summer to 787, at an average of 71.54.

Bedingham and Michael Jones (78) shared a fifth-wicket stand of 171 to see Durham score 381, and earn a first-innings lead of 250.

Worcestershire did rally, claiming six wickets for 76 runs – Josh Tongue returning fine figures of 4-73 from 25 overs – but they then limped to 99-3 in their second innings by stumps, still trailing by 151.

Matthew Potts (2-16) picked up a couple, Chris Rushworth the other, though Jake Libby remains for the hosts unbeaten on 51.

Staying in Group 1, Warwickshire pace bowlers Craig Miles and Liam Norwell tore through Derbyshire in their first innings, before the home side hit back strongly on day two in Derby.

Miles (5-30) and Norwell (4-24) shared nine wickets to skittle Derbyshire for 121, but after Warwickshire chose not to enforce the follow on, Michael Cohen took 3-26 to see the Bears reduced to 132-7 by stumps – though still with a handy lead of 285.

Elsewhere, Lewis McManus led a determined Hampshire fightback on the second day of their Group 2 match with Somerset at Taunton.

McManus walked to the crease with his side 110-5 in their first innings, and trailing by 250, before his unbeaten 91 helped them close on 285-7.

Sam Northeast also scored 67, while Keith Barker (33) and Felix Organ (21no) too chipped in with handy lower-order contributions.

No play was possible at all on Friday in two County Championship games, with washouts on day two in the games between Essex and Nottinghamshire and Kent and Northamptonshire.

At Chelmsford, Nottinghamshire will now resume their first innings on day three, currently sitting on 248-6 with Joe Clarke 57 not out. Meanwhile, in Canterbury, Northants are well placed at 362-5 after Emilio Gay’s century on day one.