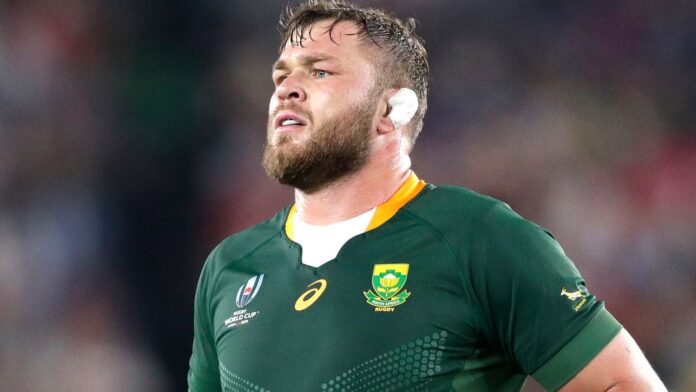 Duane Vermeulen limped out of the Bulls’ victory over domestic rivals the Stormers on Friday night having injured his ankle; Marcell Coetzee was omitted from South Africa’s 46-man squad announced on Saturday but Rassie Erasmus says the former Ulster back row may yet feature

South Africa director of rugby Rassie Erasmus has expressed concern over the fitness of No 8 Duane Vermeulen ahead of the British & Irish Lions series, but believes the balance of the squad is better than when the Springboks won the World Cup.

Vermeulen limped out of the Bulls’ victory over domestic rivals the Stormers on Friday night having injured his ankle, and his absence would be a major blow given his power at the back of the scrum and effort on defence.

“Duane is a big worry for us. He is going for scans on Monday,” Erasmus told reporters when the Boks announced their 46-man selection on Saturday.

“We will keep the squad as is until we have the full medical report on everybody. There is a lot that can happen, we had some injuries this weekend.”

Former Ulster loose forward Marcell Coetzee was not named in the South Africa squad, but Erasmus said he is a possible replacement should Vermeulen be forced out.

“Marcell is in the frame, but he had not played for nine weeks before yesterday,” he said. “We want to see him at his best.”

The Boks retained 30 of their 33 players from the World Cup triumph in Japan, with only the retired trio of prop Tendai Mtawarira, hooker Schalk Brits and loose-forward Francois Louw not in the mix.

But Erasmus says the addition of eight uncapped players, with a long season that also includes two Tests against Georgia preceding the Lions, the Rugby Championship and the Autumn internationals, has given the squad a better balance than when they lifted the World Cup in Japan in 2019.

“We want to blend a mix of experience and those guys who are on form, and this squad represents that. Obviously we will always differ [in opinion] over a few positions, but I think the squad has a better balance now.

“Certainly better than at the World Cup with the youngsters coming in.”

The expanded squad will first be in action in two warm-up Tests against Georgia on July 2 and 9, before they face the Lions on three consecutive Saturdays from July 24.

The South Africa ‘A’ side to face the Lions on July 14 will also be selected from this squad.