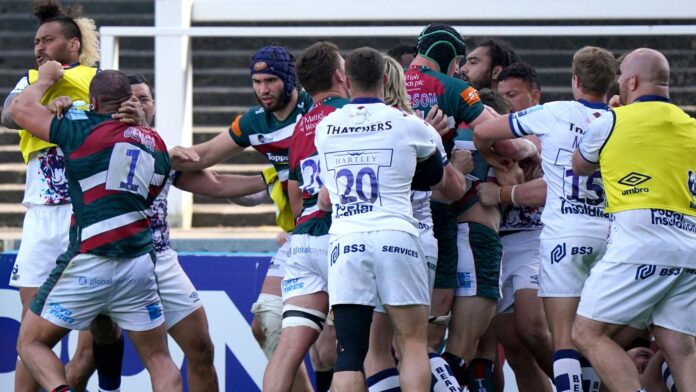 There was a heated touchline discussion over who should replace Nahuel Chaparro after Bristol’s replacement prop was sin-binned in stoppage time; John Afoa returned to the action and helped Bristol win a Leicester scrum; final whistle then blew with scuffles breaking out among the players

Semi Radradra scored two tries as Bristol secured a home semi-final in the Gallagher Premiership play-offs with a 26-23 bonus-point victory over Leicester in a pulsating game at Mattioli Woods Welford Road.

Bristol’s win leaves them eight points clear at the Premiership summit and a home win over London Irish next Saturday will ensure that they finish top of the pile.

They gave the battling Tigers a lesson in chance taking with Max Malins and Harry Randall adding to Radradra’s efforts, with Callum Sheedy converting three of the four scores.

Bristol received a pre-match blow when Kyle Sinckler withdrew with a hamstring injury with John Afoa stepping up from the bench to replace him.

Afoa was the centre of controversy at the end of the match when Steve Borthwick and Pat Lam were involved in a heated touchline discussion with referee Ian Tempest over who should replace Nahuel Chaparro after Bristol’s replacement prop was sin-binned in stoppage time.

Chaparro and fellow Bristol front-rower Jake Kerr were both yellow-carded as the visitors’ scrum was battered in the final stages and there was a six-minute break before starting prop Afoa, who had been replaced at half-time by Chaparro, returned for the final scrum.

The lengthy delay was to establish whether Afoa had gone off at half-time for injury – in which case he would not have been able to return – or for tactical reasons.

As tensions rose on the sidelines, the former New Zealand prop returned to the action and then helped Bristol win a Leicester attacking scrum. The final whistle then blew with scuffles breaking out among the players.

Tom Willis scored a last-second try to complete a hat-trick and an amazing comeback by Wasps as they defeated London Irish 39-36 in an absolute barnstormer.

The visitors had trailed 33-10 after a torrid first half at the Brentford Community Stadium, in which Curtis Rona and Albert Tuisue both scored twice for the Exiles, who ran in five tries during the first 40 minutes.

But Wasps refused to lie down and were a team transformed after the break, with this victory lifting them up to seventh in the table with just one match of the season remaining.

It just hasn’t been the same without you #WaspsAlways 🐝 pic.twitter.com/O89nhUGFlM

Tuisue claimed his second right on half-time, seemingly ended the match as a contest, but Wasps pulled a try back two minutes after the restart when Jack Willis went over down the left following a break by Marcus Watson.

The fightback from the visitors continued when Jeff Toomaga-Allen’s off-load put Jacob Umaga into space down the right and his pass allowed Watson to dive in at the corner.

Irish lost lock Adam Coleman to the sin bin, as they leaked penalties, and Wasps soon struck again, as Willis scored off the back of a driving maul.

A penalty stopped the rot for the hosts, but Wasps just kept coming and they reduced the gap to six points with 14 minutes left through a brilliant finish from 40 metres out by Josh Bassett.

With the clock in the red, Watson was forced into touch before he could ground the ball while advantage was being played, but the visitors would not be denied from the resulting penalty as Willis crashed over to snatch the win and complete his hat-trick.

George McGuigan was Newcastle’s other try-scorer, getting the second of the game from a driving lineout.

The Falcons were in control from the get-go and dominated up front, forcing the Warriors into changing their entire front row before the half-hour mark.

Worcester scored two consolation tries in the second half through Jamie Shillcock and Ted Hill, but were outclassed by the Falcons, who bagged their ninth league win of the season.