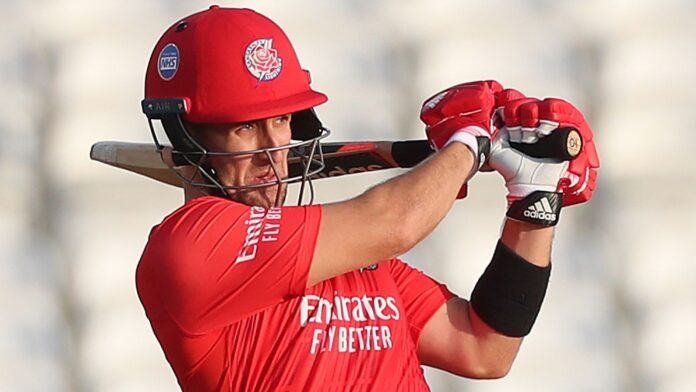 Liam Livingstone hits 10 fours and two sixes to lift Lancashire to victory over Derbyshire in the opening game of the 2021 Vitality Blast; Jos Buttler strikes 30 from 28 balls in first game since scoring an IPL century for Rajasthan Royals on May 2

Liam Livingstone’s 94 not out off 58 balls saw Lancashire Lightning to their target of 169 against Derbyshire Falcons as they won the opening game of the 2021 Vitality Blast by six wickets at Emirates Old Trafford.

Opener Livingstone shared half-century partnerships with New Zealander Finn Allen (29 off 13 balls), England’s Jos Buttler (30 off 28) – who was playing his first game since hitting an IPL hundred on May 2 – and captain Dane Vilas (15 off 15) as the hosts reached their target with three balls to spare in front of around 4,000 fans.

Derbyshire had earlier posted 168-7, in which former Lancashire man Luis Reece (59 off 32) top-scored and Wayne Madsen retired not out with a suspected hamstring injury after he was hit by the ball as he dived to make his ground.

Home leg-spinner Matt Parkinson snared 3-28 from his four overs, while Livingstone also impressed with the ball, bowling Falcons captain Billy Godleman for a duck in the first over en route to economical figures of 1-22 from four overs

With the bat, Livingstone struck 10 fours and two sixes and reached his half-century from 36 deliveries, while Buttler hit three fours before he was caught on the reverse sweep at third man off the bowling of Reece (2-26).

Fynn Hudson-Prentice (2-9) also struck twice in the sole over he bowled, dismissing Allen and Alex Davies (0) in the fifth over of the chase to reduce Lancashire from 53-0 to 53-2, only for Livingstone, Buttler and Vilas to reignite the innings.

A full Vitality Blast round-up will appear here at the end of the evening.