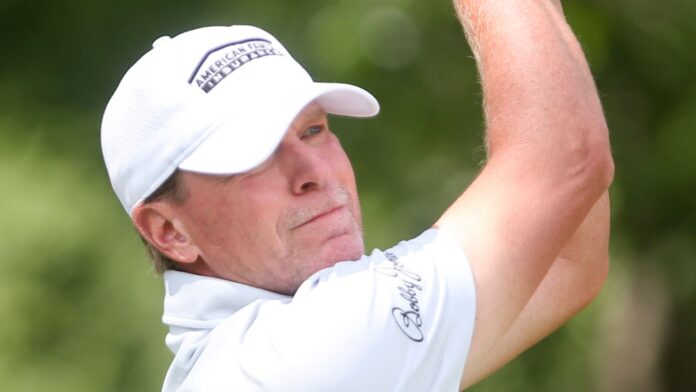 “It’s not making my job any easier. I haven’t talked to either one of them, but I will have to at some point. Hopefully, they can put their differences aside for the week, be big boys and come together as a team”

Steve Stricker has urged Brooks Koepka and Bryson DeChambeau to “put their differences aside” well ahead of the Ryder Cup in September.

The pair have been embroiled in an apparent feud since footage of Koepka’s angry reaction and offensive comments towards his American rival were leaked shortly after the PGA Championship.

Koepka was being interviewed when he was stopped in his tracks as DeChambeau walked behind him, and the prospective Ryder Cup team-mates have continued to air their differences on social media.

DeChambeau was subjected to shouts of ‘Brooksy’ from fans at The Memorial, leading to many being removed by security which prompted Koepka to offer cases of free beer to those who were thrown out.

Both have downplayed the exchanges, with Koepka insisting earlier this week that their fractured relationship would not affect the performance of Team USA at Whistling Straits, but American captain Stricker made it clear that he wanted the argument resolved.

“It’s not making my job any easier, you know?” Stricker told Wisconsin Golf. “I haven’t talked to either one of them, but I will have to at some point. We’ll see where it goes from there.

“Hopefully, they can put their differences aside for the week, be big boys and come together as a team.”

Stricker admits he is unlikely to pair Koepka and DeChambeau together during the Ryder Cup, but he is fully aware of the importance of team unity.

“Obviously, I probably wouldn’t pair them together, but I think as the team room goes, you want everybody on board,” Stricker added.

“You can’t have an outlier, or outliers, making trouble for everybody else. But I’m sure they’re big men and they can put their differences aside and go from there.”

Koepka also insisted the ongoing dispute with DeChambeau was “good for the game” and claimed the coverage of their war of words would appeal to a younger generation.

“I think it’s good for the game, I really do,” said Koepka ahead of this week’s inaugural Palmetto Championship at Congaree. “The fact that golf is on pretty much every news outlet for about two weeks pretty consistently.

“I think that’s a good thing. It’s growing the game. I get the traditionalists who don’t agree with it, I understand that, but I think to grow the game you’ve got to reach out to the younger generation.

“I don’t want to say that’s what this is, but it’s reaching out to a whole bunch of people. It’s getting golf in front of people. I think it’s good for the game.”