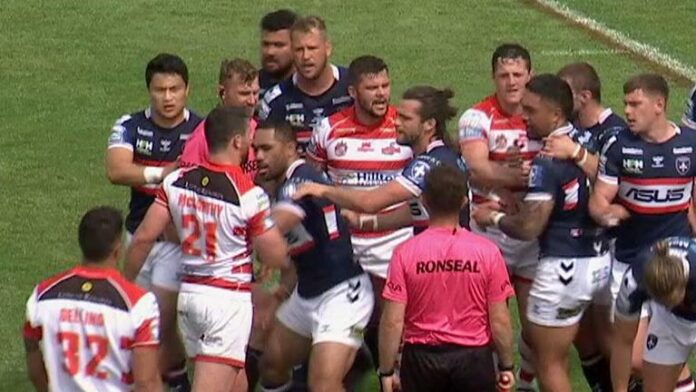 Can Centurions spring a shock?

It would be arguably the biggest upset of the Super League season so far if Leigh were to defeat Catalans, but interim head coach Kurt Haggerty is in no doubt they are capable of doing just that.

A 30-20 defeat away to Wakefield Trinity in Haggerty’s first game as interim head coach following the departure of John Duffy ensured the Centurions remain winless since being promoted.

Nevertheless, the former Leigh and Ireland back row has backed his squad to spring a shock against one of Super League’s in-form teams at Leigh Sports Village.

“Catalans have got some good players and they’ve been playing as well as anyone, but I think we are capable of beating them,” Haggerty said.

“Being at home is obviously an advantage as we look for that first win and we hope the Leigh fans will turn up in good numbers.”

The return of several players means Haggerty has been able to select a 20-man squad for this clash, having only had the bare minimum of 17 fit players to choose from last Sunday.

The 32-year-old was pleased with how the Centurions acquitted themselves against Wakefield after a disrupted week though and believes there are positives to build on.

“Considering the week we had, I’m really happy with the energy of the players and we had the potential to pinch the game at times,” Haggerty said.

No letting up from McNamara

The Dragons’ excellent recent form in Super League saw boss Steve McNamara rewarded by being named as May’s Betfred Coach of the Month.

Wins at home to the previously unbeaten duo of defending champions St Helens and last year’s Grand Final runners-up Wigan Warriors have put the French side right among the front-runners.

It is another sign of the progress the team have made since McNamara took charge midway through the 2017 campaign, but the former Bradford Bulls and England head coach knows there is plenty more work still to do.

“We’re content with the start,” McNamara said. “We’ve performed reasonably well in all our games, even in the loss to Warrington we didn’t drop our standards too far.

“From the lowest point, to then get some of the experiences that we’ve had has been decent progression, but we have got to keep it going. We’re still trying to improve.”

Saturday’s trip to Leigh Sports Village will undoubtedly bring back memories of the Million Pound Game against the Centurions four years ago, where Catalans trailed 6-4 at half-time before going on to win 26-10.

Since then, the Dragons have made history by becoming the first French team to win the Challenge Cup and last year were just 80 minutes away from a maiden Grand Final appearance, and McNamara is all too aware how different things could have been.

“It’s something we probably don’t want to know the answer to,” McNamara said. “I’m sure we would have survived in some form but going into the Championship at that stage would have been very difficult for the club.”

Leigh welcome back Matty Russell, Nathan Mason and Nathaniel Peteru after the trio missed the Wakefield defeat due to injury. Ben Reynolds returns after completing a one-match suspension too.

Fouad Yaha, Paul Seguier, Lambert Belmas and Jason Baitieri all come back into Catalans’ squad, but forwards Gil Dudson and Joel Tomkins are unavailable due to injury and suspension respectively.

Peaty: Money does not buy happiness

Working together for a more resilient world