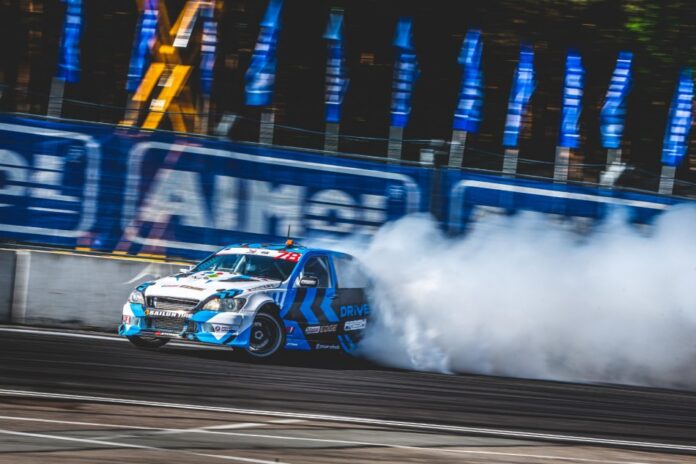 Damir Idiyatulin, driving a Toyota Altezza, topped the 2021 FIA IDC qualifying, with some of the favorites missing out on the advancement to this afternoon’s Top 32 session.

Russian Damir Idiatulin emerged on top in qualification at the Bikernieki track in Riga.

The first-ever European FIA IDC kicked off in dramatic fashion with the likes of Daigo Saito, Dmitry Illyuk and Sergei Kabargin not qualifying to the Top 32.

Only four drivers got over the mark of 90 points. RDS GP regular Idiatulin, who scored 98 points, was the sole driver who obtained a maximum of 40 possible points for the line. Two Irishmen, Jack Shanahan (Fresh Auto Drift) and James Dean (Aimol Racing), completed the top three, with each scoring 97 points on their best attempt. Apart from them, Lithuanian Benediktas Cirba was the only other driver to enter the “90+ points club“.

The reigning double FIA IDC winner Russian Georgy Chivchyan rounded out the top 10. The driver didn’t score any points on his first attempt, but bounced back with his second run, scoring 84 points. Performing at his usual high level, the Flanker F driver Arkady Tsaregradtsev entered the top-32 in 13th. His best attempt brought him 79 points.

Meanwhile, Russian driver Sergey Kabargin and Belorussian Sergey Sak managed to start qualifying runs, but spins and contacts with the barriers resulted in both failing to score any points. Therefore, those who finished in the top eight positions will only need to complete by-runs to proceed to the Top 16.