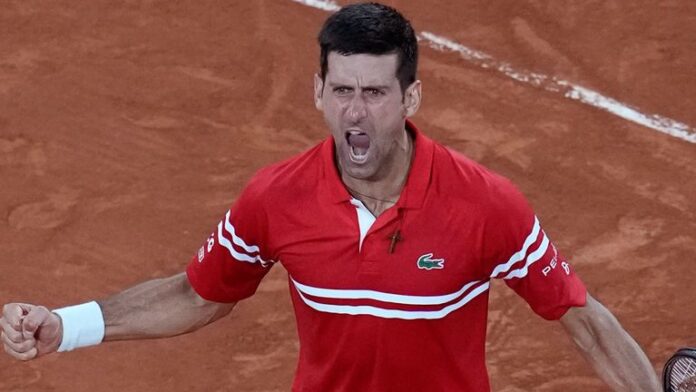 While Andrea Bocelli stunning rendition of Nessun Dorma rang around the Stadio Olimpico at the opening ceremony of Euro 2020, so Novak Djokovic and Rafael Nadal played out their own operatic classic in a ludicrously amazing French Open semi-final

As Andrea Bocelli’s rendition of Nessun Dorma rang around the Stadio Olimpico in Rome, so the two tenors of tennis played out an operatic classic of their own on a bonkers Friday night 900 miles north at Roland Garros.

Never has a tennis match had such an immeasurable amount of interest on social media as Novak Djokovic’s stunning four-set victory against ‘The King of Clay’ Rafael Nadal at the French Open.

Andy Murray called it “perfect” while Andy Roddick said it was one of the “best matches” he had ever seen and golfer Sergio Garcia described it as “out of this world”.

We even had Cher tweeting about it. Who even knew the ‘Goddess of Pop’ was a tennis fan!

Another battle to remember ! Until tomorrow 💪🏼🙌🏼 pic.twitter.com/xtJKUR0G8y

Was Novak Djokovic vs Rafael Nadal in the French Open men’s semi-finals the greatest match ever played on a clay court? #RolandGarros

In his press conference, Djokovic said it was the “most beautiful” match he had ever played in Paris.

The world No 1 said: “Definitely the best match that I was part of ever in Roland Garros for me, and top three matches that I ever played in my entire career, considering the quality of tennis, playing my biggest rival on the court where he has had so much success and has been the dominant force in the last 15-plus years, and the atmosphere, which was completely electric.

“Just one of these nights and matches that you will remember forever.”

The great Spaniard went into the contest having won 105 of his previous 107 matches on the Parisian clay, losing only to Robin Soderling in the French Open fourth round in 2009 and Djokovic in the last eight six years ago.

He had won all 13 of his previous semi-finals but, in a 58th match between the pair that for three sets maybe surpassed any that came before, Djokovic found the answers to the greatest challenge in sport to win an instant classic 3-6 6-3 7-6 (7-4) 6-2.

The biggest cheer of the night came with the announcement that the fans, who had been expected to be ejected to comply with Paris’ 11pm curfew, were in fact being allowed to stay.

The French Open and local authorities had quickly shifted gears … a “Thank you, Macron” chant referring to France’s president, Emmanuel Macron rang around Court Philippe Chatrier before a passionate rendition of La Marseillaise.

A 5,000 strong crowd got to watch an obscene third-set of tennis

In awe of what we just witnessed for the past 4 hours @DjokerNole @RafaelNadal forever champs!!

Djokovic saved a set point at 5-6 in a pivotal third set full of spellbinding rallies before taking the tie-break. He then reeled off the last six games of the match to take his record over career-long rival Nadal to 30-28.

Incredibly, Djokovic is the first player in 116 matches to beat Nadal in best-of-five sets on clay after losing the opener.

The level of tennis that @RafaelNadal and @DjokerNole played is out of this world!! Congrats on a match well played gentlemen 💯🙌🏼

Asked what it meant to beat Nadal at a Grand Slam he has owned almost exclusively since 2005, Djokovic said it was difficult to put into words.

“I mean, he has been the most dominant player of the Roland Garros history. He lost two, now three times, in his entire career here,” Djokovic said.

“The amount of wins that he has made on this court is incredible. Each time you step on the court with him, you know that you have to kind of climb Mount Everest to win.

“It’s just one of these matches that I really will remember for a very long time, not just because I won the match but because of the atmosphere, the occasion was very special.”

Nadal, always the most magnanimous of losers, said: “That’s sport, you know. Sometimes you win, sometimes you lose. I tried to give my best.

“It was probably was not my best day out there. My position on shots were not that effective. Against a player like him who takes the ball early, I was not able to take him out of his positions, then is (becomes) very difficult.

“It’s true that there were some crazy points. But if you want to win, you can’t make these mistakes. Well done to him.”

‘I couldn’t push anymore’: Katarina Johnson-Thompson opens up about her Olympics...