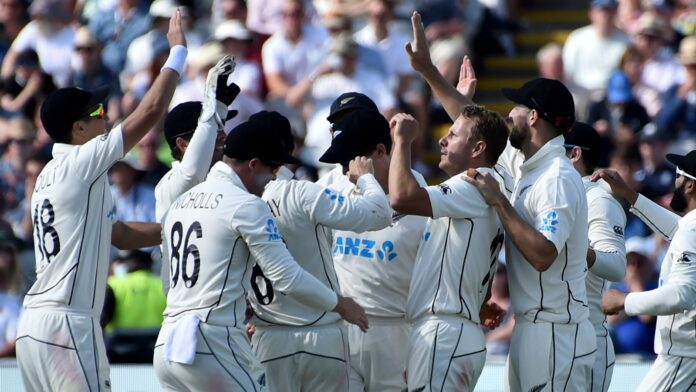 England suffered their first home series defeat since 2014 as New Zealand claimed a comprehensive eight-wicket win in the second Test at Edgbaston; the 1-0 series victory is the Black Caps’ first triumph in England in 22 years

By Sam Drury at Edgbaston

New Zealand secured their first Test series win in England since 1999 after taking just under an hour to wrap up an eight-wicket win on day four of the second Test at Edgbaston.

While the Black Caps can celebrate a famous triumph ahead of the World Test Championship final against India on Friday, England are left to come to terms with a first Test series defeat at home in seven years.

Trent Boult (2-34) ensured there would be no heroics from the England tail as he had Olly Stone (15) caught behind with the first ball of the day, drawing laughter from the sparse Edgbaston crowd, to end the hosts’ miserable second innings on 122.

That left New Zealand needing just 38 to win the match and although Stuart Broad removed Devon Conway (3) early and Stone bowled Will Young (8), stand-in skipper Tom Latham (23no) was there at the end as the Black Caps secured only their third ever series win in England.