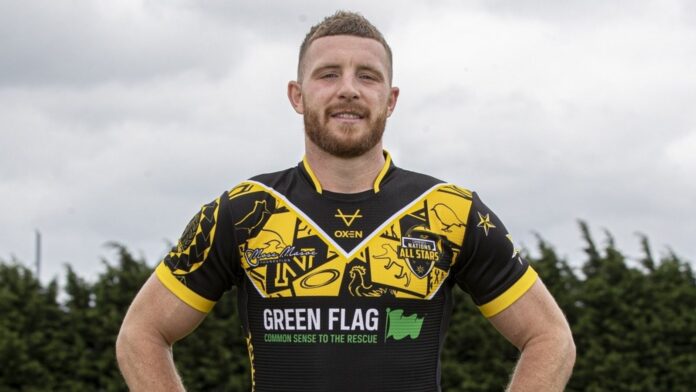 Australia-born Hastings, who represented Great Britain in 2019, will be involved with the All-Stars side against England on June 25. Watch that match and England Women’s clash with Wales at the Halliwell Jones Stadium live on Sky Sports

Jackson Hastings is set to go head to head with England later this month after being named as co-captain for the Combined Nations All-Stars team.

Although born in Australia, the Wigan Warriors half-back qualifies for Shaun Wane’s side through his English grandmother and represented Great Britain under former national team boss Wayne Bennett on their 2019 Southern Hemisphere tour.

However, not currently being part of Wane’s squad means Hastings has been called into the Combined Nations team for the match against England on Friday, June 25 – which is live on Sky Sports – by All-Stars head coach Tim Sheens.

🗣️ “It shows how far I’ve come as a person to have the trust to lead the team around.”

🤝 @JackoHastings is proud to be the Combined Nations All-Stars captain.

Speaking as the Combined Nations kit designed in conjunction with Mose Masoe was launched, the 25-year-old cannot wait to represent the team at the Halliwell Jones Stadium.

“It’s a great honour to be able to represent my heritage, to play in front of Shaun Wane and to support Mose,” Hastings, who could yet feature in Wane’s England squad for the end-of-year Rugby League World Cup, said.

“The All-Stars is a great concept, there are so many great players from overseas playing in the Super League and I’m honoured to be named co-captain.”

The shirt the All-Stars will wear has been designed to support Masoe, whose career was ended by a spinal injury suffered in a pre-season match for Hull Kingston Rovers last year, and features nods to all of his former clubs as well as replicating his own tattoos across the shoulder and sleeve.

The Mose Masoe Foundation will benefit with £10 from every replica shirt sold going directly to them and Lee Jenkinson, CEO of kit supplier OXEN, is pleased they have been able to collaborate with the former Samoa international.

“It’s been a real honour to work with Mose, [Masoe’s partner] Carissa and the wider team at the Mose Masoe Foundation in designing this year’s Combined Nations All-Stars shirt,” Jenkinson said.

“Working closely with Mose in the initial design stages, we were able to get a feel for what he’d like to see on the shirt, and we are delighted with the final result.”

Jon Wells examines the arguments around whether or not Jackson Hastings should be included in England’s World Cup squad.

Sheens, who coached Australia to World Cup glory in 2013, will name his other co-captain and the rest of his 19-man squad on Thursday, June 17, and is determined to ensure they provide England with a tough test.

“The Exiles games that were played a decade or so ago showed the amount of overseas talent in the Super League, and by rebranding as Combined Nations All Stars, it’s expanded the players available from other countries who will be involved in the World Cup,” Sheens said.

“Although we know one of the main aims of the fixture is to help Shaun Wane and his England team by providing an intense quality match as part of their World Cup preparations, I’m pretty confident that when we get the group together we’ll be determined to beat them.”