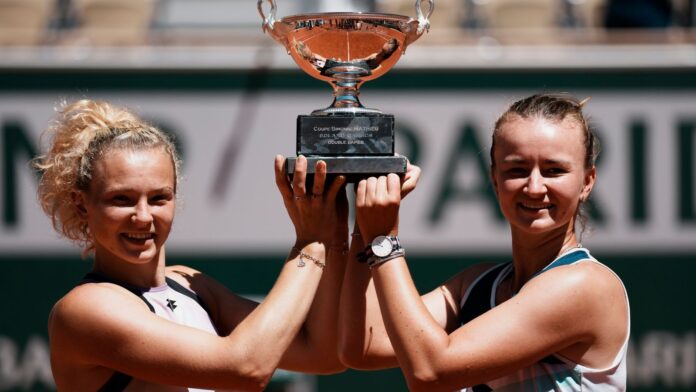 Barbora Krejcikova became the first woman for 21 years to win singles and doubles titles at the same French Open.

Krejcikova emulates France’s Mary Pierce, who achieved the feat in 2000, and wins her seventh Slam trophy.

The 25-year-old Krejcikova, who will climb to 15th in singles and she will return as the world No 1 doubles player when the rankings are updated on Monday.

“I think we are going to have a dinner together this evening,” she told reporters.

“We will have a little bit glass of champagne. I already said I don’t really drink but I think it’s a time to actually celebrate it. I think we are going to really enjoy.

“The rest, I just want to go back home. I just really have to relax. I have to spend some time with my family. After that just start to work again.”

Less than 24 hours after picking up her first singles major title, Krejcikova returned to Court Philippe Chatrier but it was not easy.

“Like yesterday so many emotions and everything. I didn’t really sleep well. I woke up in the morning and I felt really tired. I can actually say that out loud right now, I’m having some pains in my leg,” she said.

“I’m really happy that it went this way. I actually went really relaxed today when I went on court. I was just trying to really support my partner and also just try to cheer her up a little bit.”

Krejcikova will be making her singles main draw debut at Wimbledon as a seed having been ranked outside the the 100 less than a year ago.

She said: “I hope I’m going to have some chances on the grass, but I don’t really know because I’m not that experienced on it. We will see. I’m just really looking forward to playing the next tournament and every tournament.

“Right now, after all of this happened, this last two weeks, last two days, I feel really relieved and relaxed. I just know from now on I can really enjoy because I have pretty much achieved everything I really wanted.”

Krejcikova and Siniakova won titles at Roland Garros and Wimbledon in 2018, while she has won the mixed doubles at the Australian Open for the last three years.