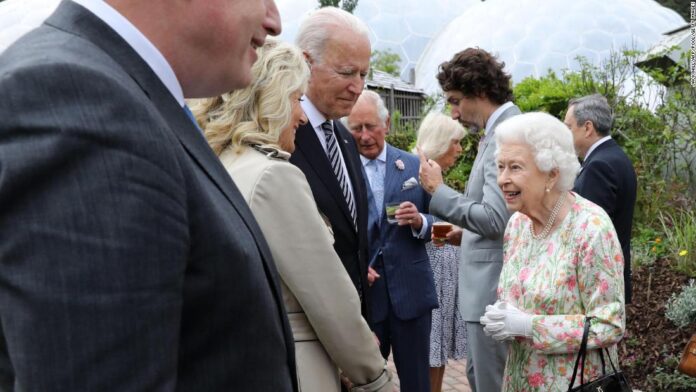 His successor Joe Biden used his elbows differently this week. Arriving to his first global summit, he crooked his arm to extend pandemic-era greetings to a group of leaders who no longer have to tiptoe around a truculent and often angry American president.
Officials attending this week’s Group of 7 summit on the Cornish coast in England are emerging shell-shocked after four years dealing with a US president who often appeared intent on injecting animosity into their gatherings. In front of cameras and behind-the-scenes this weekend, officials said the abrasive interjections and lengthy tangents Trump brought to world summits were absent, replaced by a more businesslike and predictable agenda, including on areas of serious disagreement like China.
Asked alongside Biden on Saturday whether the United States was back, French President Emmanuel Macron answered yes.
“Definitely,” he said, waves crashing in Carbis Bay in the background.
Even the special guest at a Friday night reception took note of the new vibe.
“Are you supposed to be looking as if you’re enjoying yourself?” quipped Britain’s Queen Elizabeth, who later was pictured in friendly conversation with Biden and his wife outside a futuristic biosphere, her son Prince Charles and his wife Camilla clutching drinks in the background.

During their first session on Friday afternoon, held in front of a picture window at a seaside resort, the world leaders took turns speaking about efforts to contain the pandemic, according to officials familiar with the talks. Biden, seated between British Prime Minister Boris Johnson and Canada’s Justin Trudeau, appeared prepared, according to one European official, describing his administration’s recent purchase of Pfizer doses as a major gesture meant to bring other countries along.
A senior administration official said the first session was meant to highlight areas of agreement. A second session on Saturday proved more divisive as world leaders aired serious differences over how best to approach China.
The disagreements, aired during a session that at one point became so sensitive that all internet was shut off to the room, pitted European nations against the United States, Britain and Canada, who urged stronger action against China for its authoritarian practices, including forced labor practices in western Xinjiang province.
At one point, Biden made a forceful call to other leaders about vocally calling out China’s anti-democratic practices, officials said, emphasizing the need to take action.
Still, though the leaders disagreed, the session was marked by new respect among the leaders after four years of tension under Trump.
“These leaders really seem to like each other and respect each other, and work through where that sweet spot might be,” the senior administration official said, describing real effort at finding consensus on tricky issues, including China.
To both sessions, Biden brought with him a large white plastic binder, printed with the presidential seal on the cover, to consult on figures and facts. Biden is a new president, but he’s very at home with this set of leaders. That means he can focus on the substance of the upcoming summit, a senior administration official told CNN.
President Biden’s First Trip Abroad
Biden is offering an altogether different approach than Trump, underscoring warm ties with traditional US allies in an attempt to repair what Trump fractured. His sentiments of friendship often paper over what are real differences between the United States and its allies, in particular on China, trade and global vaccine efforts.
The senior administration official said Biden doesn’t view these summits as just box-checking events, but more of an opportunity to move forward and make progress when it comes to substance and challenges.
There remains ongoing debate about just how far — and explicitly — to directly call out forced-labor practices targeting ethnic minorities in the communiqué slated for release at the end of the summit, a key push by US officials over the course of the meetings that is expected to ramp up on Saturday.
“It’s too early to say what will end up in the final (communiqué),” a second senior administration official said. “But certainly, that’s our position, and that’s what we’ve been advocating for.”
Still, the group is expected to join Biden in announcing a new global infrastructure plan meant to counter China’s Belt and Road initiative at the conclusion of their talks.

“This meeting was about the future. Not the past.’

At least in tone and optics, this weekend’s G7 is starkly different from those held in Italy, Canada and France during the years Trump was in office.
From his golf course across the Atlantic, Trump sought to inject himself into the club of foreign leaders to which he once belonged, delivering blistering criticism of Biden’s first trip overseas, particularly the summit next week with Putin.
“Please give him my warmest regards!” Trump said in a statement.
Yet inside the seaside room at Carbis Bay on Friday, after the leaders took their seats around a table and launched into their private discussions that lasted for about 90 minutes, Trump was anything but the focal point of conversation. In fact, according to people briefed on the meeting, his named was barely mentioned at all.
“This meeting was about the future,” one senior diplomatic official briefed on the session told CNN. “Not the past.”
During this first session Friday, Biden focused on the critical nature of the moment that democracies find themselves in and the need to show the world they can still deliver.
A senior European official echoed that sentiment, saying that far from lingering on the palpable friction of the four years prior, the initial meeting and interactions between leaders settled quickly into a “business-like” atmosphere of confronting the scale of the challenges facing the alliance and their home countries.
“I don’t think anyone sees value in replaying what transpired in with the previous administration,” the official said. Still, the official noted, Trump’s absence doesn’t erase the recent experiences — and an unsettled political environment in the US is still on the minds of key allies, even if it’s not something any planned to bring directly to Biden’s attention in these initial summit meetings.
Instead, it’s clear world leaders are vocally relieved to have moved on, making little attempt to veil their pleasure at a return to more normal relations with the United States.
“I am, of course, happy that the American President is present here,” said German Chancellor Angela Merkel, who has now sat around a G7 table with four American presidents. “He stands for the commitment to multilateralism, which we were missing in recent years.”
“I think it’s great to have the US President part of the group and very willing to cooperate,” Macron said during his meeting with Biden. Earlier, he posted a video of himself gripping Biden’s arms as they engaged in intense conversation.
“It’s a breath of fresh air,” said Johnson, the summit’s host, after meeting Biden on Thursday. That Biden once deemed Johnson the “physical and emotional clone” of Trump went unsaid.

The President appeared relaxed when he arrived to the summit alongside his wife on Friday. Under light drizzle, Jill Biden likened the meet-and-greet to a wedding.
Later, as the leaders emerged in a pack from the bayside resort where the summit is being held, the group was smiling broadly alongside Biden as they made their way to have their traditional “family photo” taken before the first session.
Making his way back indoors, Biden walked arm-in-arm with Macron — who hosted the last in-person G7 meeting on the Atlantic coast in 2019, which devolved partly into an argument led by Trump over whether to allow Russia to rejoin the group.
Macron and Biden ended up walking so slowly in each other’s arms that other leaders, including Trudeau, had to circle around them to get inside.
As the afternoon wore on, Biden held a “pull-aside” meeting with Macron, which onlookers described as intense but collegial. They will meet more formally on Saturday.
Macron’s 2019 summit in Biarritz was the third G7 that Trump attended, and the third to demonstrate serious strain with other world leaders.
At his first G7 summit, held cliffside in Sicily, his fellow leaders all nudged Trump to remain in the Paris climate accord. Aides said he felt ganged up on and announced a US withdrawal from the pact a few months later.
Signs the 45th President wasn’t exactly fitting in were rampant. As other leaders strolled through the summit venue to a photo-op, Trump rode separately in a golf cart.
The next year, the G7 summit hosted by Trudeau in the northern woods of Quebec ended in disarray after Trump, having left early, announced from his departing flight he was withdrawing his signature from the concluding statement.
He told reporters before he left that his relations with G7 leaders were “10 out of 10,” and scoffed at suggestions he was more looking forward to his next engagement, with North Korea’s Kim Jong Un in Singapore.
But the images of that summit of a scowling Trump, arms crossed, being pressed by leaders including Merkel over the summit communiqué became the iconic images of an isolated US president.
By the time Trump administration officials began planning for the next year’s summit, hosted by France, there were open questions of whether he’d agree to attend. He told his aides he believed they were a waste of time. And he griped at the yearly focus on climate change issues that he felt ignored more pressing economic and security threats.
He was eventually convinced to attend. But at a welcome dinner held underneath the Biarritz lighthouse overlooking the Atlantic, Trump lobbied fellow leaders aggressively on readmitting Russia to their group after it was ousted following Moscow’s 2014 invasion of Ukraine. During the dinner, Trump argued repeatedly that his predecessor Barack Obama was to blame for ejecting Russia from the group, formerly known as the Group of 8.
Last year, when it was Trump’s turn to host the G7, he vowed to invite Russia as a participant in the summit. But the event never materialized due to the Covid-19 pandemic.
After Biden defeated Trump, his aides made clear that Russia wouldn’t be invited back to this group. Instead, his first face-to-face meeting with Putin will happen separately, when the two meet Wednesday in Geneva.

Belarusian dissidents fear the regime will put them into detention camps. It may have already built one