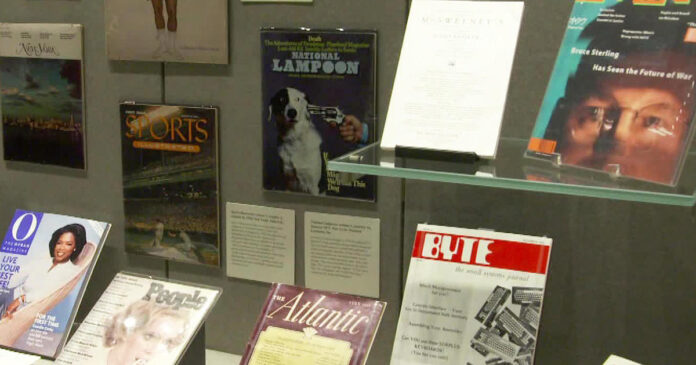 “I grew up in an era where if you’re on the cover of Life, you’ve made it,” said Dr. Steven Lomazow. “It’s the greatest thing ever – the boldest of bold-faced names.”

You could call Lomazow America’s most passionate collector of magazines, but that would be underselling. After all, it’s one thing to develop a hobby. It’s another thing to have that hobby mushroom into a situation where you own 83,000 magazines – 7,000 different titles.

He told correspondent Jim Axelrod it’s a collection he started after stumbling into an old bookstore in Chicago while in medical school: “It had the first issue of Look magazine – at least that’s what they said. And sure enough, I looked inside and it said, ‘Look magazine, Volume 1, Number 2.’ And I said, ‘What was Number 1?’ And the dealer says, ‘We don’t know.’

Lomazow selected 200 from his collection, which were recently on display at the Grolier Club in New York City.  The exhibit, “Magazines and the American Experience” (now available online), looks at how we used to conduct data searches for more than 2½ centuries.

“These days, if you want some information, you turn on your phone or you turn on your laptop and you google a term – you say, ‘Okay, I wanna hear about Franklin Delano Roosevelt.’ So, 10 pages come up,” Lomazow said. “In the early days, what did you do? You went to Life magazine and you say, ‘Wow, let’s find articles about President Roosevelt.'”

Axelrod asked, “So, Time and Life and Newsweek and Look and People and Sports Illustrated, this was the internet before the internet?”

“Absolutely. That’s where you went when you wanted to get information.”

They’re all here, from a New York Weekly Journal dating to 1733, to the 19th century intellectual bibles (Atlantic Monthly, Harper’s) still published today … from rarities like the Hobo News, to Norman Rockwell covers for the Saturday Evening Post, to magazines covering every hobby, sport, issue, interest and type of humor.

“They’re all represented,” Lomazow said. “The one that comes off the top of my head is people with a hand fetish, there’s a magazine for that. [Movie Stars’ Handies, published in 1936.] There’s magazines for everything. There’s always a magazine!”

“There’s something very democratic, I think, about the magazine,” said curator Julie Carlsen. “They’ve always been a sort of glue that held communities together, especially marginalized ones, and gave them a voice.

“The history’s written by the victors. But they are usually standing on a platform of many other people whose stories maybe aren’t heard. And when you look at magazines, because they were a little bit more informal – everyone could make them – you have all these voices, and you see a really complete picture,” she said.

Take the Harlemite, from 1963. Carlsen said, “If you ask a lot of people what was happening in Harlem at the 1960s, they might think of civil rights unrest that was happening at that time, when in fact here you have this wonderful magazine of literature and music [which] just shows a thriving arts community, which completely disrupts that narrative.”

Or a magazine titled One, which advertised science and satire on its cover, but was actually America’s first magazine for gays.

“It’s very plain,” said Carlsen. “It looks like you’re just reading a regular digest. So, it says a lot about what you were allowed to be seen reading at the time, and how sneaky, perhaps, you had to be to get the information you wanted to get when you couldn’t just open a private browser on your computer.”

“And yet for the people reading it, it may have been a bit of a lifeline?” asked Axelrod.

Magazines gave our culture a place for Ernest Hemingway to first publish. and photojournalism to take root. The Atlantic turned Paul Revere into an icon by publishing Longfellow’s poem about him, and Harper’s Bazaar vaulted cover girl Lauren Bacall into Hollywood royalty.

Carlsen said, “Looking back on it, magazines were important at the time. But it takes someone like Steven to collect all of them, to be able to look back and say, ‘Oh, wow, they really served a bigger purpose than maybe we fully appreciated.'”

Axelrod asked Lomazow, “This exhibit sort of feels a little bit like a wake?”

“Well,” he sighed, “this is actually, in a way, the epitaph of the printed American magazine.”

But Steve Lomazow had a great run, ever since that day nearly half a century ago, when that dealer described the mythical Look magazine Volume 1 Number 1 –  often talked about, but rarely if ever seen.

“I’ve seen three of them in my life,” Lomazow smiled. “I own two of them now!”

“Of course, you do,” Axelrod laughed.