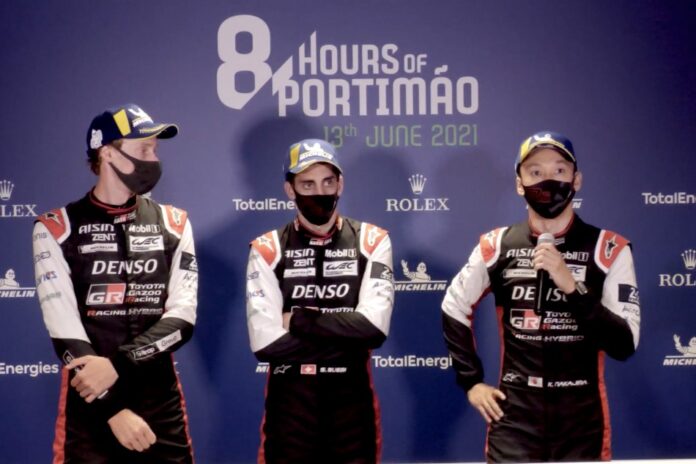 The class winners took part in the post race press conference after the 8 Hours of Portimao.

“At the end we were on a different kind of strategy to car (number) seven and from the first stint onwards I was able to go a lap longer than them, and still obviously be in the fight.

“We went a couple of times a lap longer and towards the end due to the safety car we were just able to miss the splash (pit-stop). I had to go again for a lap longer when No.7 passed me and I was trying to go for two laps longer and we managed to do that and then obviously with the full course yellow we were very unlucky with it.

“Otherwise No.7 should have had obviously a much longer splash and it would have been easier, but with the FCY it made it very, very close, so I’m thrilled that we managed to win the race in the end.”

“It was tough out there, really tough. I think all the GT’s suffered with blistering and with the temperatures here it was unavoidable. So even trying to cool the tyres down, we couldn’t as there’s a big drop in performance and obviously a risk of tyre failures, so we had to really manage it well.

“However, the team did a great job with the strategy as we weren’t the quickest car on track because the Porsche was still better on pace. But the team made it happen and we got a 1-2, so I’m quite surprised considering we struggled all weekend to get a good balance on the car, but it’s good to get the win.

“On my birthday it’s even better. I’ve not drunk anything since January, so I’m going to have a beer tonight.”

“Firstly, we got stung at the beginning with Roberto being hit (by Dragonspeed) and the team did such a great job that we were in that position at the end.

“Then I had the car to fight and it was my teammates, so I knew exactly what they had as well. I was quicker than Tom but I knew without traffic, it would not be possible to overtake and he was driving really, really well and doing no mistakes.

“So I was just waiting for traffic and if the opportunity came up, so I could see the slower GT’s and I decided to close the gap that lap to try and really have a go and it happened.

“To be honest I feel for him (Blomqvist) because I’ve been exactly in that situation in Bahrain last year with Gaby (Aubry) in the last four or five laps as well. So I knew exactly how to do it because it has been done to me, and luckily it turned out well and I’m so happy to win at home.”

“This is this is a special day for us and for me too. This is my first victory in FIA WEC and we have for a long time been working to arrive here and we are very, very happy.

“It is what this programme deserves and what the people deserve, and is such a special victory. Thanks to Antonio (Fuoco), Giorgio (Sernagiotto), Amato (Ferrari) and Antonio (Coletta).

“We are really looking forward to Monza now, our home race which will be special.”

“It was very tough for us but we are very happy that there is already this Pro/Am trophy in order for us to make it a fight with other Pro-Am teams.

“I have to say thank you to my teammates to Norman and also to Mathias, because they did a really great job and of course the level is so high in WEC. But it’s fascinating to see that in a race of eight hours everything can change.

“We started not too easy. I did also two first stints which was not too bad but the last one was really difficult because I had two spins and I could continue the race. This is what took us here I think, it’s that we fought until the end and this is what we have to have in mind when we do endurance, especially in the WEC.”