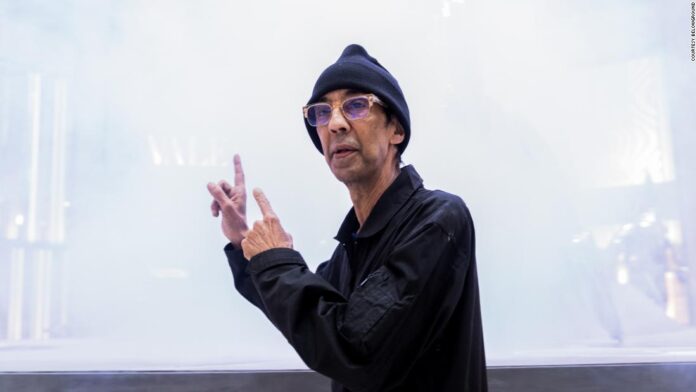 In the early 1980s, Leonard McGurr’s name was often uttered in the same breath as those of his artist friends Jean-Michel Basquiat and Keith Haring. Known then as Futura 2000, he was a rising star of New York’s graffiti scene, his celebrated subway murals bridging the gap between graphic street art and abstraction.

But then, as galleries began merging street art with fine art — an evolution that would propel some of his contemporaries to multi-million-dollar stardom — he grew disillusioned with the establishment. “I got sour,” he recalls.

“I felt I was just being manipulated a bit. I was a token in their world,” McGurr says of the institutions he felt were pigeonholing his work. “Yeah, I was showing in a gallery with Jean-Michel, Keith, Kenny (Scharf) and other contemporary artists. But then there I was — the ‘the subway guy’ — and I’m there thinking, ‘The gallery is using me.'”

A work by Futura on display at a Monaco exhibition about the history of street art in 2011. Credit: Patrick Aventurier/Getty Images

In the decades that followed, he moved beyond walls, canvases and aerosols, finding new mediums for an aesthetic that nods to particle physics and the space age. With two children to support, McGurr shunned exhibitions in favor of graphic design and, later, edgy brand collaborations with the likes of Comme des Garçons and Nike.

His spacey atoms and rocket ships — signature forms often set against hazy, colorful blotches of spray paint — have since found their way onto sneakers, streetwear and even bottles of Hennessey cognac.

“In the end, I found other things to do,” he says. “I got into clothing, I got into other means of expression, I found the internet in the 1990s. I just tried things other than being a classic artist, represented by XYZ gallery in Asia and North America — you know, the classic cookie cutter stuff.”

None of this is to say that McGurr hasn’t been successful — far from it. After all, it would be unfair to measure anyone’s accomplishments against those of his most idolized contemporaries. (“Jean-Michel was the golden child,” McGurr notes fondly of his late friend. “He was the chosen one.”)

But now, aged 65, the New Yorker is finally getting his dues.

Known simply as Futura (the new millennium rendered “2000” an anachronism), McGurr is arguably more relevant than ever. Having long embraced the kind of collaborations that have become de rigueur for today’s contemporary artists, he finds himself perfectly placed to capitalize on his decades-long experience.

McGurr may be old enough to have fathered two millennials, but he also epitomizes the zeitgeist of new, younger generations of art collectors. He is currently collaborating with Italian bikemaker Cinelli, and has recently designed a special edition BMW and a line of Uniqlo activewear bearing paint streaks and atom graphics. He has also just finished filming a MasterClass, the celebrity-led online learning platform reserved for industries’ biggest names, from Gordon Ramsay to Samuel L. Jackson (“I guess I’ll be teaching kids how to spray paint,” he muses).

“I feel I’ve been very patient, but I’m getting mine now,” he says.

When it comes to limited edition collectibles, a lucrative industry for contemporary art heavyweights like Yayoi Kusama and KAWS, McGurr is an old hand, too.
We meet in the labyrinthine basement of Hong Kong’s upscale Landmark mall, where McGurr’s “Futuraland” sculptures, mobiles and streetwear are available via a pop-up store that counts Dior and Gucci as neighbors. In the atrium above, his largest work to date — a 20-foot-tall stainless-steel rocket — regularly shoots clouds of smoke over passing shoppers.

True to his name, Futura is unrelentingly forward-facing. Fresh out of Hong Kong’s mandatory two-week Covid-19 hotel quarantine, he has already moved on from the ordeal. “Once I walked out of there yesterday morning, from my point of view, it never happened,” he says. “It’s like I just arrived from the airport.”

“I look at my life that way too. I don’t live in the rear-view mirror. I don’t want to come telling you about everything I did. Who cares, it’s irrelevant.”

Having just declared the past’s irrelevance, McGurr gamely entertains my questions about his early career. (“I certainly don’t ever mind taking about it,” he clarifies. “And I have a great memory and know exactly what happened.”)

After breaking onto New York’s underground graffiti scene in the ’70s, it was his 1980 “Break” mural that earned McGurr wider recognition. Bringing an entire subway car to life in brooding shades of orange, he centered the work on an abstract patch of striking blue and purple that seemed to shine out through imagined cracks.

It was perhaps little surprise that New York, the city responsible for Abstract Expressionism, might also produce a style of nonfigurative street art that eschewed bold lettering and cartoonish forms. But, McGurr says, “it wasn’t premeditated.”

A work by Futura on dsiplay at an exhibition in Calais, northern France. Credit: Denis Charlet/AFP/Getty Images

“I didn’t really know much about art,” he says, “I didn’t know De Kooning, I didn’t know Rothko … I couldn’t name you anybody that was an abstract painter. I knew Warhol, Lichtenstein and Rauschenberg. I knew about American art but I wasn’t really into it.”

“People were comparing me to Kandinsky,” he adds, “But it was kind of an accident what I did.”

Accidental or not, McGurr may now be benefiting from revived interest in the street scene he emerged from. With Basquiat the undisputed star of New York’s recent spring auctions (his 1983 painting “In This Case” sold at Christie’s for $93.1 million), there appears to be growing institutional intrigue about an era directly responsible for many of today’s art stars, from Banksy and JR to Shepard Fairey and Osgemeos.

“The story that we were telling, way prematurely to its acceptance, is all coming back,” McGurr says. “And all the contemporary artists of the moment are out there keeping it going, and transitioning from the street to commercial galleries and institutions or whatever their path is.”

Fitting, perhaps, that McGurr is also dipping his toe back into the institutional waters. In 2020 he exhibited a series of paintings at gallerist Eric Firestone’s New York space (a show dubbed “Futura 2020”). And despite Covid-related postponements, he hopes to open a show at Takashi Murakami’s Tokyo gallery later this year.

Overcoming his misgivings about the art establishment is both about “being in control of production and publication” and finding — in Firestone and Hong Kong’s AllRightsReserved — representatives he trusts.

“I have too many options to let myself get manipulated now,” McGurr says.

Nonetheless, his reasons for reconnecting with the art mainstream still closely resemble his reasons for rejecting it in the first place: For Futura, the idea of legacy appears closely tied to the wellbeing of his family.

“Prior to Keith (Haring’s) passing, he laid out a bunch of artworks for all these kids — my son got three or four pieces,” he recalls. “I thought ‘Wow, dude, how benevolent and generous of you. You know you’re going to die, and you’re taking care of other people and children?’ So, I was super inspired by that.

“For the moment, I’m preparing for my guys, putting away work and archiving stuff. My digital IP will live in perpetuity. You know at some point my family, whether 100 years from now or in 2050, will be able to use that.”

“Futuraland” is at the Landmark Atrium, Hong Kong, until June 16.