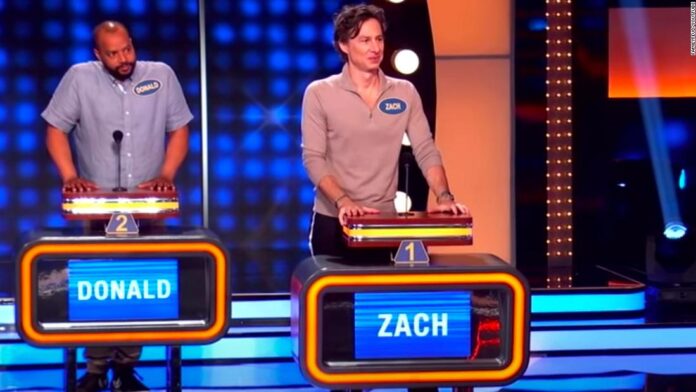 Zach Braff and Donald Faison, who played J.D. and Turk on the show, competed alongside the “Fake Doctors, Real Friends” podcast team, which included Joelle Monique, the producer of the podcast, podcast editor Daniel “Danl” Goodman and Bill Lawrence, the creator and executive producer of “Scrubs.”
The team faced off against Neil Flynn, who played the janitor on the hit show, and his Beer Shark Mice improv team, which included Pete Hulne, Paul Vaillancourt, Pat Finn, Michael Coleman and Dave Koechner.
Faison was a hit with his wacky answers, at one point he yelled out “alligator” when Steve Harvey asked which animal would help you get over the fence in a zoo. Braff guessed the top answer with giraffe. Faison also responded “California” when asked to name a city with a lot of rich people living in it, before changing that to “Los Angeles,” the top answer.
The “Scrubs” team won $25,000 for the organization Stop AAPI Hate.