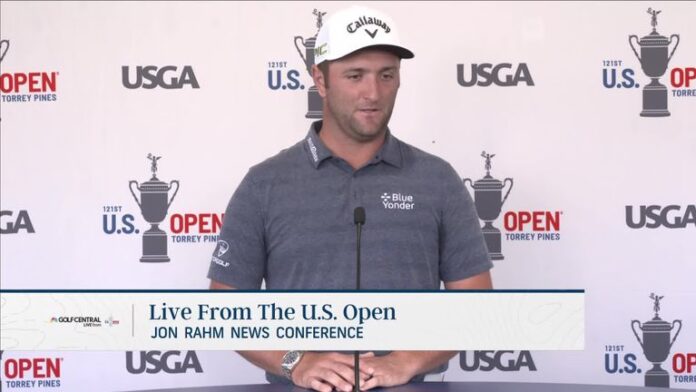 “To all the people criticising the PGA Tour, they shouldn’t. We are in a pandemic, and even though this virus has very different forms of attacking people, you never know what reaction you’re going to get. So the PGA Tour did what they had to do”

Jon Rahm has defended the PGA Tour’s decision to make him withdraw from The Memorial due to Covid-19 earlier this month, despite him holding a six-shot lead at Muirfield Village

Jon Rahm insists he has no complaints with the PGA Tour over its handling of his disqualification from the Memorial Tournament earlier this month.

The world No 3 was forced to withdraw after the third round at Muirfield Village – when he held a six-shot lead after shooting a 64 – after being informed he had given a positive test for coronavirus.

Rahm was told the news live on television as he left the 18th green by the PGA Tour’s medical advisor and there was criticism over how the situation was handled by the PGA Tour as well as the ruling itself, with some claiming he should have been allowed to play the final round alone.

But the Spaniard, who has now been cleared to return to action in this week’s US Open after returning two negative tests for Covid-19, has accepted the ruling.

“To all the people criticising the PGA Tour, they shouldn’t,” said Rahm. “We are in a pandemic, and even though this virus has very different forms of attacking people, you never know what reaction you’re going to get. So the PGA Tour did what they had to do.

“The CDC (Centers for Disease Control and Prevention) rules for a reason. There’s players that missed the World Series last year. There’s other athletes that have missed events.

“Unfortunately, I had a really good showing, and I was pulled out of the tournament right before the final round, but, again, the PGA Tour did what they had to do. I’ve heard a lot of different theories: I should have played alone; I shouldn’t have – that’s nonsense. The rules are there, and it’s clear.

“I’m not going to lie, I was fully aware when I was in tracing protocol that that was a possibility. I knew that could happen. I was hoping it wouldn’t. I was playing like it’s not going to, but I support what the PGA Tour did.

“It could have been handled a little bit better possibly, but they did what they had to do.”

Henni Koyack gives an update on the dramatic, forced withdrawal of Jon Rahm from The Memorial, and why he was told he tested positive for Covid-19 just as he left the 18th green on Saturday

Rahm was tested daily at the Memorial under Covid-tracing protocol which he could have avoided if he had been vaccinated earlier.

“Truth is I was vaccinated,” he said. “I just wasn’t out of that 14-day period. I had started the process, and unfortunately, that’s how timing ended up being. It’s just I was still within those 14 days when I started Covid-tracing protocol, and I had to stay in it.”

Patrick Cantlay went on to win the Memorial by beating Collin Morikawa in a play-off after the pair had finished on 13 under, and Rahm admitted he had watched the final round as they ended up five shots behind his score when he withdrew.

He added: “These are circumstances that happen in life, and they were still competing for the event, and I’m still a student and avid fan of the game. So, yeah, I was watching. To be honest, I was kind of wondering how close they were going to get to 18 under at the same time.

Patrick Cantlay admitted Rahm’s withdrawal shocked the field at The Memorial, but it did not dampen his mood after winning the title for the second time

“Again, if they didn’t, at least mental victory in my sense, right? I never was thinking what could have happened because I wasn’t there physically playing. I don’t know how it was playing on Sunday. But, yeah, I took it with a grain of salt. I had a bad thing happen. It is what it is.”

Rahm is now at Torrey Pines preparing for his sixth US Open and the 26-year-old is the bookies’ favourite to win his first major at a venue where he has performed well in the past.

He claimed his first PGA Tour victory in the Farmers Insurance Open at Torrey Pines in 2017 and has since finished tied-29th, tied-fifth, second and tied-seventh in that event.

After coming out of his period of self-isolation, Rahm is now fine-tuning his game and hopes to be back in the form he was displaying in the Memorial when he tees off on Thursday.

“When you don’t hit a golf shot for just over a week or just about a week, it’s tough leading into a major, especially a US Open. I’m confident I can get in form quick enough. I still have two more days,” he said at his press conference on Tuesday.

“I still have the memory of all those great golf shots I played, right? I’m going to choose to remember that. I’ve been playing really good golf all year. Two weeks ago, it’s finally clicking all together like I was waiting for it to happen. Finally everything was firing on all cylinders.

“Not that I’m expecting to play that perfect again, but I know that I can play at a really high level. So I’m confident, yeah.”