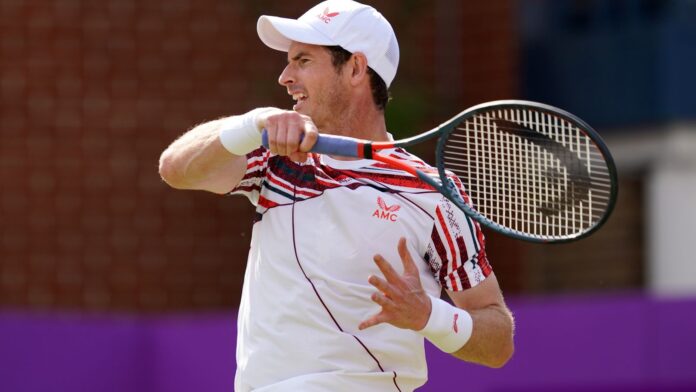 Andy Murray is one of the initial recipients of a Wimbledon wildcard; Five-time Queen’s Club winner Murray made a brilliant winning start to his cinch Championship campaign against Frenchman Benoit Paire with a straight-sets win in his first competitive singles match since March

Andy Murray has been announced as one of the initial recipients of a Wimbledon wildcard.

The two-time champion, who played just his third ATP singles match of the year at Queen’s Club on Tuesday, is ranked down at 124, which is outside the cut-off for direct qualification.

Meanwhile, Eva Shaw of Nottinghamshire and Middlesex’s William Jansen have received qualifying wildcards for the tournament after they were crowned champions in the 18 & Under Girls and 18 & Under Boys events at the LTA’s Junior National Championships.

The event, which took place on the grass courts of Surbiton Tennis Club, saw 138 junior players from across the country compete for the boys and girls national titles in singles and doubles.

Winning the national junior title has traditionally been a stepping stone on the journey to becoming a professional for the country’s leading players, with the roll of honour including such names as Murray, Heather Watson, Kyle Edmund, Dan Evans, Anne Keothavong and Tim Henman.

Shaw, 16, who trains at the National Tennis Academy at Loughborough University as part of the LTA’s Performance Pathway, defeated Suffolk’s Kylie Bilchev 2-6, 7-5, 7-6(3) in a close contest that came down to the wire.

Jansen, also 16, prevailed 7-6(4), 6-4 against top seed William Nolan of Derbyshire in the Boys Singles to claim the title.

Murray made a superb winning start in his first singles outing since March as the former world No 1 defeated Benoit Paire at Queen’s Club on Tuesday.

With Wimbledon just around the corner, Murray’s tennis appears to be in good shape as the three-time Grand Slam winner made a successful return in his first singles outing on grass in three years by defeating Frenchman Paire 6-3 6-2.

Murray has struggled to return to his former level since having hip resurfacing surgery in January 2019 with niggling injuries limiting his tournament time.

“The body is old but, I did quite well with my movement,” Murray said on court after his victory.

“I love it, I love playing tennis,” Murray continued, before he paused due to the emotion of the occasion overcoming him.

“Obviously, competing is why you put in all of the hard work. In the last few years, I’ve not got to do that as much as I would have liked, so it’s just great that I’m out here and able to compete again.”