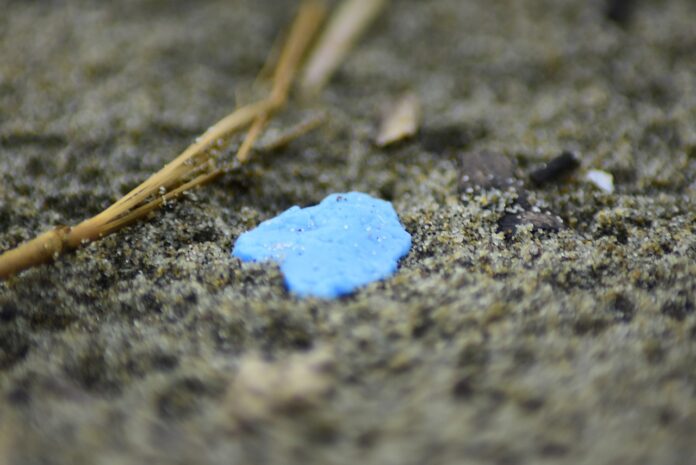 Plastics are everywhere. I mean everywhere. They have become so pervasive that they can be found on Mount Everest, in the Mariana Trench, orbiting our planet and within our bodies themselves. The last century is the Age of Plastic and thanks to its longevity, plastics will likely last in the geologic record of our planet longer than most any man-made substance. We will be remembered 100,000 years from now for our plastic and that deep time perspective of our planet is tailor made for Earth scientists to tackle.

Finding Your Way Through Time

How do Earth scientists find their way through the rock record? On our planet, that record stretches back over 4 billion years. If you want to understand the events and processes that were happening, you need to figure out how to tell where you are in time and space on a scale that is longer than almost any other field of scientific inquiry.

It is not like there are little signs in the rock record that read “Welcome to the Triassic.” Instead, we have to use a combination of the relative timing between events and species and the absolute ages determined using laboratory methods like uranium-lead or carbon-14 dating. When both lines of evidence mesh, then we can unravel both when things might have happened but also how quickly.

Sometimes, the markers for different time periods are easier. The boundary between the Cretaceous and Paleogene is marked by the evidence of the Chixculub impact, like the global chemical spike of the element iridium or the disappearance of a wide range of species. Big, global events like a good ol’ fashioned extinction make great markers in time.

We can also use the arrival and disappearance of specific species. Now, not all species are great for this. You want a species that was found across the planet (or at least across a wide region), relatively common but only exist for a short window of time. We call these index fossils and in a sense, they’re like the flags that tell you are in a specific slice of time.

Plastics in the Deep Ocean

In 2018, researchers from Tongji University and the Chinese Academy of Sciences took submersibles into the canyons in the northwest South China Sea. At depths of over 6,200 feet (1,900 meters), they were astounded to find huge piles of trash, most of which was plastics. One of the piles was over 8000 cubic feet — something like two tractor trailers worth of plastic and debris.

In a paper published in Geology, Guangfa Zhong and Xiaotong Peng suggest that all this plastic was actually deposited much closer to the coast and was carried over 60 miles (100 kilometers) down these canyons by large undersea landslides called turbidites. So, even though the trash might make it into the ocean near the coast, a lot of it eventually gets carried into the deep ocean by such processes.

This doesn’t even take into account the issue of microplastics — tiny shards of plastic formed from the breakdown or burning of plastic material. This material is pervasive in deep sea sediment, on land, even in organisms themselves. The microplastic can both degrade and release hazardous chemicals into the environmental or transport chemicals that attach to the pieces.

Plastic itself is becoming part of our planet’s sedimentary cycle. In another Geology article, Ian Kane and Andrea Fildani argue that the deep time is needed to understand the impact of plastics on the planet. Much like fine geologic material, these microplastics can slowly but surely be transported to the deep ocean to be deposited. However, it isn’t immediate and might take up to 10,000 years for these man-made materials to make it there.

Plastic debris on the beach at Kanapou Bay in Hawaii. Credit: NOAA.

We all know that plastic can survive for thousands of years on the surface. Kane and Fildani wonder how long it might last in a very different environment at the bottom of the ocean. Rarely are such questions addressed because humans just don’t tend to think on timescales that long, but when it comes down to it, our plastic problem might outlive our species.

That’s why plastic will be one of our main marks in the rock record. Just like widespread organisms that exist for brief windows of time make great time markers in the rock record, our plastic addiction will likely do the same. Plastics are so pervasive and unique in the history of Earth that when the layers of rock created today are found in a million years, someone will note the presence of either the plastic itself or the chemical signature of these substances.

Even if we stopped using all plastics immediately (unrealistic, obviously, on many fronts), that record would remain. Existing plastics will continue to move in our rivers, shores, oceans, getting carried and deposited long after they were used briefly by people. Even if the longterm ecologic impact is smaller than we think, it will still be there to mark when the planet was briefly flooded by this exotic substance. If we are the progenitors of the next global extiction, that plastic residue might be the human equivalent of the iridium left from that last major catastrophy.