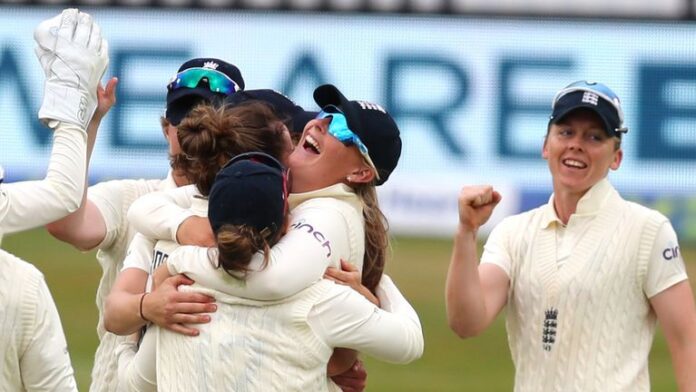 Shafali Verma (96) and Smriti Mandhana (78) produce a record-breaking opening partnership for India, who lose five wickets for 16 runs as England seize control of the Women’s Test in Bristol; watch day three live on Sky Sports Mix from 10.45am on Friday

Highlights of Day Two of the first Test between England Women and India Women from the Bristol County Ground.

England enjoyed an incredible revival to seize control of the LV= Insurance Women’s Test against India, despite 17-year-old sensation Shafali Verma producing a stunning innings of 96 on the second day at Bristol.

In response to England’s first innings total of 396, 17-year-old Verma (96) and Smriti Mandhana (78) rewrote the record books with some scintillating strokeplay to compile a sensational opening stand of 167 – India’s highest in women’s Test cricket.

However, the visitors were left to rue an extraordinary capitulation in the closing stages, losing five wickets for just 16 runs as they closed on 187-5, trailing by 209 runs.

Heather Knight (2-1) led from the front with a brilliant six-over spell, while Kate Cross (1-40), Nat Sciver (1-21) and Sophie Ecclestone (1-61) all chipped in to change the dynamic at the County Ground.

Earlier in the day, Sophia Dunkley (74 no) became the 10th woman to make a fifty on her Test debut for England, while an explosive cameo from Anya Shrubsole (47 off 33) helped the hosts post their sixth-highest score in red-ball cricket.

With England resuming on 269-6, India were hopeful of exploiting the overcast conditions with the new ball, and Jhulan Goswami (1-58) made an immediate breakthrough, trapping Katherine Brunt (8) lbw following a smart review.

Dunkley was undeterred; rebuilding England’s innings alongside Ecclestone (17), and after successfully overturning an lbw decision on 46, the debutant brought up her fifty with a delicate clip off her legs.

Shrubsole put a beleaguered Indian bowling line-up to the sword after lunch, falling just short of a maiden Test fifty which prompted a declaration from Knight at 396-9, with Dunkley unbeaten on 74.

India looked dejected after a gruelling 122 overs in the field, although their spirits were raised by a magnificent opening partnership between Mandhana and Verma, who complemented each other magnificently.

Verma – renowned for her T20 exploits – enjoyed some good fortune in the early stages of her innings as Brunt and Shrubsole produced high-quality opening spells, but she grew in confidence and stature as India reached tea unscathed at 63-0.

The visitors made a blistering start to the evening session and Verma performed with refreshing freedom – registering 13 fours and two sixes in her wonderful 152-ball knock.

The teenager posted the highest score by an Indian woman on Test debut, although after racing into the 90’s, she was dismissed just four runs short of history, miscuing a full delivery from Cross to Shrubsole at mid-off.

Mandhana adopted the aggressor’s mantle following Verma’s dismissal, but having brought up her second Test half-century in typically elegant fashion, she was deceived by a slower delivery from Sciver.

This sparked an incredible collapse from India, and their decision to insert nightwatchwoman Shikha Pandey backfired, with the No 11 chipping the ball straight back to Knight to depart without troubling the scorers.

The visitors’ woes were compounded when they lost their indomitable captain Mithali Raj moments later, as Ecclestone made an instant impact on her return to the attack.

Tammy Beaumont took a regulation catch at short leg after Raj (2) was induced forward following a flighted delivery, and whilst she was initially given not out, a successful review from England led to her demise.

Punam Raut (2) struggled for fluency throughout her 31-ball innings and she succumbed following a bemusing misjudgement, opting to leave a straight delivery from Knight which saw her trapped plumb in front.

However, India were handed a reprieve in the closing stages. Harmanpreet Kaur was adjudged lbw on-field, although England were denied another prized scalp, as the review showed there was a faint inside edge.

Knight’s side certainly have the impetus heading into day three, and they will be hoping the rain stays away as they eye a first-ever Test victory against India on home soil.

Live coverage of the Women’s Test between England and India continues on Sky Sports Mix from 10.45am on Friday.