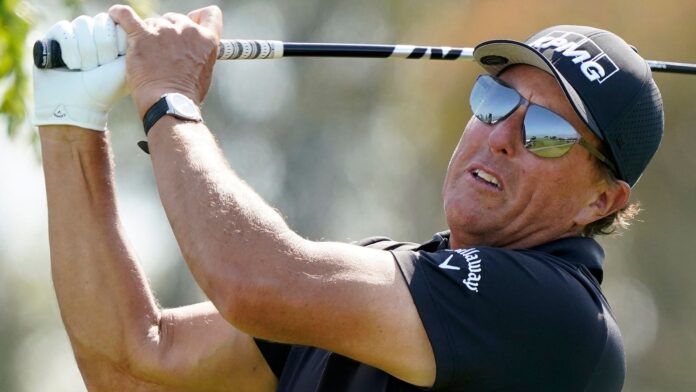 Phil Mickelson was distracted by a spectator’s phone on multiple occasions during an opening-round 75 at the US Open, leaving him eight off the pace as he looks to complete the career Grand Slam at Torrey Pines.

Phil Mickelson’s hopes of completing the career Grand Slam suffered a major setback after a disappointing start to his US Open bid at Torrey Pines.

Mickelson, a six-time runner-up at the US Open, arrived in California off the back of last month’s shock victory at the PGA Championship and looking to become only the sixth player in history to win all four majors.

The 51-year-old only registered one birdie during his opening round as he struggled to a four-over 75, leaving him eight strokes behind early pacesetter Russell Henley, where Mickelson was left frustrated by numerous distractions from spectators’ mobile phones.

“It’s part of professional golf. You have to learn to deal with it,” Mickelson said. “I don’t understand why you just can’t turn that little button on the side into silent.

“I probably didn’t deal with it internally as well as I could have or as well as I need to. It’s part of playing the game out here at this level. Certainly I didn’t do the best job of dealing with it.

“It’s the video ding. They just kept going off. Look, it did it the next three or four shots thereafter, too, so it’s not like that’s the first time, it’s just that you had to ask three times. You have to be able to let that go and not let it get to you and be able to kind of compose yourself and regather your thoughts and so forth, but they certainly didn’t do me any favours.”

Mickelson bogeyed the tenth – his opening hole of the day – and was disrupted by a phone “dinging” several times as he prepared for his second shot at the par-five 13th.

The six-time major champion eventually bogeyed the hole after sending his approach into a bush, having to take a penalty drop, and then seeing his fourth shot ricochet off the pin back off the green.

Mickelson dropped a shot at the 15th and followed a birdie at the 17th with a three-putt par at the par-five next, with two further bogeys after the turn dropping him further down the leaderboard.

“It was a great setup and I had some chances to get the round a little bit better,” Mickelson said. “Fought hard, made a lot of short putts to kind of keep myself in it and then I ended up bogeying six and seven.

“Two over would have been a pretty good round and I ended up at four (over), so I’m a little disappointed about that. I feel like I’m close and I’m close to putting together a good round.”

Mickelson is joined eight off the pace by 2020 PGA champion Collin Morikawa, who mixed an eagle and two birdies with six bogeys and a double-bogey during an eventful opening round.

“Not the start I wanted, bogeying every par-3, and I think I had like three three-putts today,” Morikawa admitted. “It’s not acceptable. It’s not how you keep yourself in a tournament on a Thursday.

“You know what, this course is going to play tough, and I’ve still go at least tomorrow to just grind it out and see how it goes. Had some stretches of decent golf, I’ve just got to keep doing that and really not compound the errors.”