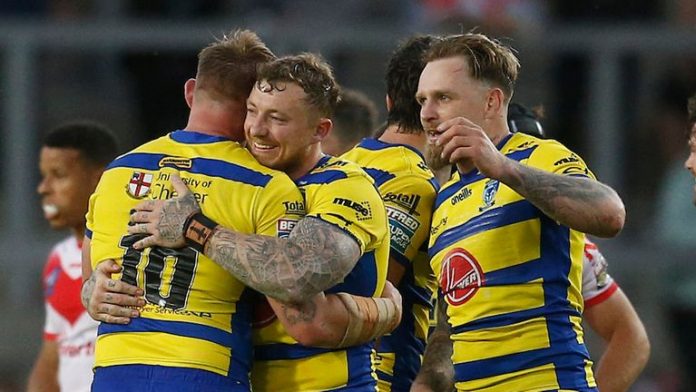 Warrington Wolves win at the home of double Super League defending champions St Helens, and keep the Saints try-less for the first time since last season’s Grand Final; Ben Currie scored the only try in the game for the Wolves, as a compelling defensive performance saw them over the line

Warrington kept Super League champions St Helens try-less and condemned them to a first home defeat of the season by grinding out a 6-2 victory at the Totally Wicked Stadium.

England second rower Ben Currie scored the only try of a defence-dominated, error-strewn round-10 fixture on Thursday night as Warrington secured a fourth win in a row over Saints, who missed the chance to go back to the top of the table.

Kristian Woolf’s men looked well out of sync following their enforced week off as they went up against the team with the most potent attack in Super League who also showed they can defend for their lives.

Warrington, with the luxury of being able to field the same team for the third week in a row, looked the more enterprising team from the start, with Super League’s player of the month Gareth Widdop pulling the strings.

In a rare foray deep into the visitors’ territory, Saints took the lead with a penalty from Lachlan Coote after England prop Alex Walmsley had been held down in the tackle in front of the posts.

Wolves full-back Stefan Ratchford took a heavy knock in that tackle from which he never appeared to recover but his side had plenty of other creative players in the side.

They scored the only try on 22 minutes when Widdop’s cut-out pass unleashed winger Tom Lineham and Currie was on hand to finish off the move.

Widdop added the conversion but was wide with a penalty just before half-time after St Helens winger Tom Makinson was pulled up for running behind a team-mate as he attempted a clearance run.

Leading 6-2 at the break, Warrington thought they had scored again eight minutes into the second half when Ratchford finished a break by Josh Charnley only to be brought back for a forward pass.

Saints second rower Joe Batchelor was then tackled by Warrington captain Jack Hughes inches short of the line at the other end as the game began to open up.

The champions showed more urgency in the second half but began to come up with handling errors as their customary accuracy composure deserted them.

Centre Jack Welsby went close to touching down Theo Fages’ grubber kick and, after Warrington centre Toby King lost the ball in a tackle 20 metres out from his own line, Saints subjected their visitors’ defence to the most intense pressure.

They were camped inside the Wolves 20-metre area for a five-minute spell and it looked to have paid off when Makinson picked up a dipping pass from Jonny Lomax only for referee Chris Kendall to rule it went forward.