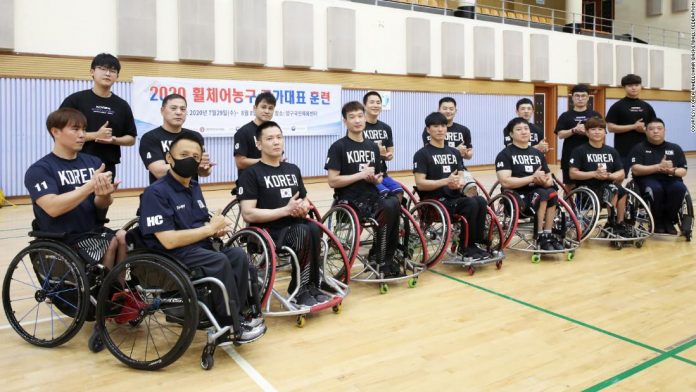 He competed at Sydney and then led the South Korean wheelchair basketball team to its first Paralympics in 21 years.
He had wanted to be at the Tokyo Paralympics, but after the Covid-19 pandemic postponed the Games by a year, Han died of cancer.
“For 10 years, Han told the team that the goal isn’t to go to the Paralympics, but it’s to reach the semifinals,” South Korean national wheelchair basketball team captain Cho Seung-hyun told CNN Sport.
As the team counts down to the 2020 Tokyo Paralympics, it has pledged to fulfill that ambition of its late head coach.
The South Korean wheelchair basketball team has only been to the Paralympics twice: when its country hosted the Games in 1988 and in 2000 when an extra place was given for Asia when Sydney staged the event.
Han was in Sydney, as a wheelchair basketball player, though South Korea finished eleventh out of 12 participating countries
He retired as a player in 2002 and became the head coach of the national team in 2008 to complete his goal of reaching the semifinal at the Paralympics.
READ: Cycling as solace: He broke his back and his life changed forever
Cho was a national team newbie in 2008 when he first met Han.
“He gave me hard times that I wanted to give up basketball,” Cho recalled.
But as Cho got older and improved, Han showed trust in him and even helped him detail his post-retirement plan of becoming a coach. Eventually, Cho began looking up to Han, calling him his “role model.”
He describes Han as a hardworking leader with a great love for basketball.
“Basketball was all he thought of … except for when he was sleeping,” Cho said.

Every six months, Han had regular health checkups due to the liver cirrhosis he had suffered for years, but one day in 2018, he came back from the hospital with a worried look on his face.
“Han said he was diagnosed with liver cancer but it’s nothing serious and he just needs to be treated,” Cho recalled. “We didn’t think it would be this serious.”
Cancer wouldn’t overcome Han’s love for basketball — at least for two years.
Tokyo 2020
Han continued to coach the national team and the Seoul City Hall wheelchair basketball team while receiving treatment.
In 2019, he even temporarily halted treatment to go to the 2019 Asia Oceania Championship held in Pattaya, Thailand, despite the team asking him not to take the risk. The team finished second, after Australia, to secure their 2020 Tokyo Paralympics ticket.
“I personally think his condition worsened as of that point,” Cho said.
The team trained in Yanggu, Gangwon province, in August when the Icheon Training Center was banned last year in March due to Covid-19. From there, Han made five-hour round trips to Seoul every night to get treatment after training — up until a month before he died.
Battling cancer is not easy, but Han didn’t want to distract the players, so he kept his condition a secret from most of the team except for captain Cho and few veteran players.
When Cho found Han throwing up in his room due to the exhausting anticancer drug he had been put on, the coach told his captain to come in quickly and close the door so other players don’t see him suffering in pain.
“Han was honest about his condition to some, but in front of others he said, ‘I’m okay, everything’s fine,’ but he was in great pain,” Cho recalled.
Han died on September 26, 2020. Liver cancer had quickly spread to his lungs and face.
About a week before he died, Han gathered the team at the hospital lobby, the only allowed location for visitors to meet a patient due to Covid-19 restrictions.
Long reads
Cho remembers Han coming down with a respirator attached and his body half the size from what it had been a month previously.
Han held and spoke to each player. He didn’t forget to remind Cho of his responsibilities as a captain, the same message he gave Cho every time.
“Even when I’m going through hard times,” Cho said, “he always told me to take care of others because I’m the captain and one of the oldest.”

Had the Paralympics not been delayed by the Covid-19 pandemic, Cho believes that his late coach would have traveled to Tokyo to put a period on his career.
“I think he would’ve felt better if he had closed his eyes in Tokyo, because Paralympics was his final goal,” Cho said, acknowledging that Han would have insisted on traveling despite his poor health condition.
The team, now led by Han’s former teammate Ko Kwang-yub, is back focusing on the Paralympics in Tokyo, working to fulfill its late head coach’s dream.
Even when the South Korean wheelchair basketball team wasn’t good enough to be in top 10, Han told the players that they can make it to the Paralympic semifinals if they make the effort.
“Having been told for years that we can do it, I actually think it’s doable,” Cho said of the team’s goal as it prepares for the Paralympics.
The team has been fully vaccinated and returned to the Icheon Training Center under strict Covid-19 measures — outside people are banned while athletes are required to get tested to enter the facility — and is spending more than 20 days a month there.
As a captain, Cho acknowledged that the team has a lot to improve, which it was able to work on during the extra year given. “We didn’t struggle too much when the Games were postponed due to Covid-19,” he explained.
When asked what he would tell Han if he could at this moment, Cho pondered and said, “We’ll always keep you in our hearts … I believe your basketball will work at the Paralympics, so if you can watch over us from the heaven, we’ll do our best to achieve your unfinished goal.”

Delta variant travel restrictions: Tourists wonder where they can go — and whether they should