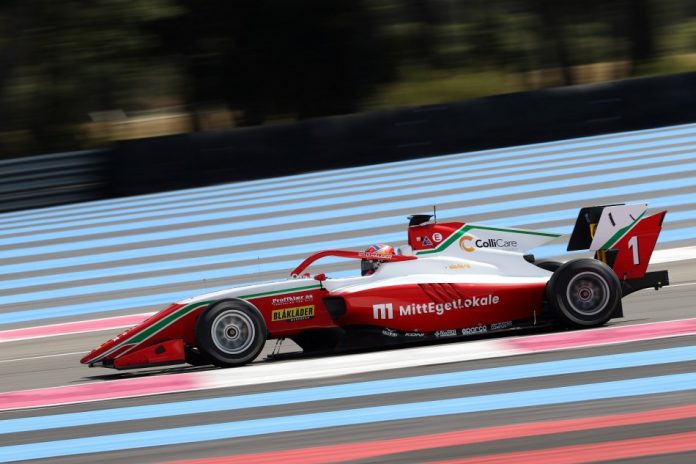 A last gasp lap from Dennis Hauger earned the PREMA Racing driver first place in the opening session of Round 2, with the Norwegian beating MP Motorsport’s Caio Collet and Trident’s Jack Doohan in Free Practice with a time of 1:51.478.

Heading out into warm 24-degree morning heat, the field were greeted by the welcome sight of fans in seats around the Paul Ricard circuit.

Pierre-Louis Chovet set the first official time, leading the field around the 5.8km circuit at 1:55.469. The Frenchman is substituting for László Tóth at Campos Racing, following the Hungarian’s positive COVID-19 test before the event.

Jumping to first, Collet shaved 2s off Chovet’s time as the field got to grips with the French circuit, while Frederik Vesti dived into second. The Dane was swiftly replaced in P2 by Jak Crawford and Calan Williams, although neither could match Collet.

Collet did what the rest of the field had failed to do and beat his own best time, lapping at 1:52.402, while Vesti returned to second, 0.327s off the MP Motorsport driver. The Brazilian’s stranglehold on P1 was broken with 20 minutes to go as the PREMA of Dennis Hauger beat his time with a tour of 1:52.297.

Reshad de Gerus was struggling with the limits around Le Castellet, running wide at Turn 2, before later skidding off at Turn 6 and striking the barriers, which brought out a Red Flag.

The field returned with 14 minutes to go, but there was little change to the order before action was halted again when Rafael Villagomez span his HWA RACELAB, resulting in a brief Virtual Safety Car.

The session sprung into life when action resumed, with a flurry of late lap times. Crawford broke the 1m 52s barrier to top the first of two final runs, but it was Hauger who ended the morning in first place. The Norwegian ace sliced five-tenths off the Hitech driver’s time to go top at the death, as Crawford dropped down fifth.

Despite leading large parts of the session, Collet had to settle for second at the flag, 0.252s off the PREMA. Doohan dove into third as part of the late runs, three tenths off the quickest time.

Sitting second with less than 30s to go, Vesti ended up fourth ahead of Victor Martins. Alex Smolyar and Jonny Edgar both improved to break into the top 10, ahead of Williams and his new Jenzer Motorsport teammate Johnathan Hoggard.

UK and Romanian crew killed in attack on tanker linked to...

Delta variant travel restrictions: Tourists wonder where they can go —...