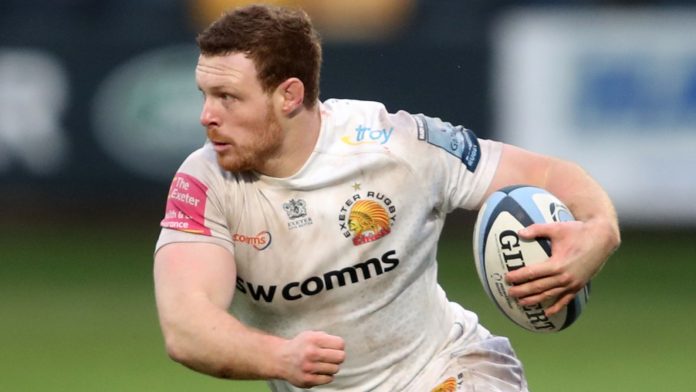 Sam Simmonds has scored a Premiership record 20 tries this season; the 26-year-old was crowned Rugby Players’ Association men’s player of the year earlier this month; the Exeter Chiefs No 8 will tour South Africa with the British and Irish Lions over the summer

Exeter forward Sam Simmonds has been named Gallagher Premiership player of the season.

Simmonds, who will tour South Africa with the British and Irish Lions next month, has scored a Premiership record 20 tries this term.

He proved an instrumental figure behind Exeter reaching the Premiership play-offs – they host Sale Sharks on Saturday – after finishing second behind regular season table-toppers Bristol.

The other three players short-listed for the award were Bristol pair Steven Luatua and Piers O’Conor, in addition to Leicester back-row forward Jasper Wiese.

Exeter forwards Sam Skinner and Dave Ewers have been suspended and will miss the Chiefs’ Gallagher Premiership play-off against Sale Sharks on Saturday.

The Rugby Football Union said both players appeared before an online independent disciplinary panel and they each received a four-week ban.

It means they will also miss the Premiership final at Twickenham on June 26 if Exeter beat Sale.

The RFU said that both players contested the charges, but they were upheld by the disciplinary panel.

In a statement, the panel said: “Both cases involved direct contact with an opponent’s head that carried a high degree of danger.

“None of the mitigating factors set out in the World Rugby Head Contact Process which would have justified the red card otherwise being reduced to a yellow card were present.

“Neither player accepted the charge and so full mitigation credit was not available to them.”

It is a major double setback for Exeter, who are bidding to reach a sixth successive Premiership final.

Victory over Sale at Sandy Park would book a Twickenham appointment with Bristol or Harlequins.

Sale, meanwhile, will also be without key players for the game, with fly-half AJ MacGinty and flanker Cameron Neild both sidelined because of injuries.