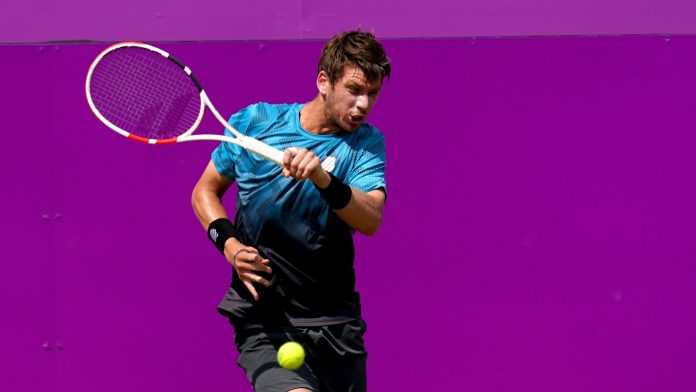 For the first time in the tournament’s history, three British players reached the last eight at Queen’s Club in west London, and despite relentless rain across the day play finally got underway just after 4pm when Evans and Berretini took to the court.

However, it was all eyes on the second game on Centre Court as British No 2 Norrie and 19-year-old Draper took to the stage with a place in the semi-finals at stake.

Draper, the world No 309, had enjoyed a dream week in just his second ATP Tour level event, but after wins over Jannick Sinner and Alexander Bublik – both members of the world’s top 40 – he came up short as Norrie ran out a 6-3, 6-3 winner.

Cameron Norrie beats Jack Draper and the fading light to reach his 4th semi-final of the year, on a 3rd different surface.

25-year-old Norrie has two clay-court finals already this season as he chases his first ATP singles title and his experience told as he got the better of the key moments, twice breaking Draper in the opening set before adding a single break in the second set while Draper could convert none of the five break points he fashioned.

Norrie, who will rise into the top 40 for the first time in his career when the rankings are updated, will face either second seed Denis Shapovalov or Frances Tiafoe in Saturday’s semi-final – Shapovalov took the first set before play was suspended in the fading light.

But what a week for Jack Draper 🇬🇧

Jack is the youngest Brit to reach the quarter-finals in an @atptour tournament since @andy_murray at the
2006 ATP Masters 1000 in Cincinnati pic.twitter.com/sVDBKRDzAn

Berrettini had beaten three-time Grand Slam champion and former world No 1 Andy Murray on Thursday and he added the name of the current British No 1 Dan Evans to his list, coming through in straight sets to reach the last four.

However, it wasn’t all straight forward for big-hitting Berrettini who only managed to break the Evans serve once, but that was enough to seal a date with fourth seed Alex De Minaur in the last four after the Australian beat former champion Marin Cilic in three sets.

The 25-year-old from Rome, a quarter-finalist at Roland Garros a couple of weeks ago, claimed a tight first set on tie break, before adding a solitary break in the second to seal a 7-6, 6-3 victory and a date with fourth seed Alex De Minaur in the last four.

Evans, who has four previous victories over top 10-ranked players, fashioned just a couple of half chances in his first Queen’s Club quarter-final, but was pleased with his week’s work on the grass courts.

“I thought he played a good match, and I thought I did well to hang around,” he said after the match.

“Obviously I got in some winning positions in the first set and didn’t take them. So that’s life. But I’m right there. I’m right there or thereabouts where I want to be at this point on the grass.”

The WTA event in Birmingham was not as fortunate as London, all four quarter-finals scheduled for Friday were washed out, meaning Saturday will see the last eight and semi-final matches take place on the same day.

Vandeweghe, a former top 10 player, reached two Grand Slam semifinals in 2017 and twice has been a quarterfinalist at Wimbledon.

She earned her first tour-level, main-draw victory in nearly two years on Monday by beating Kristyna Pliskova in straight sets.