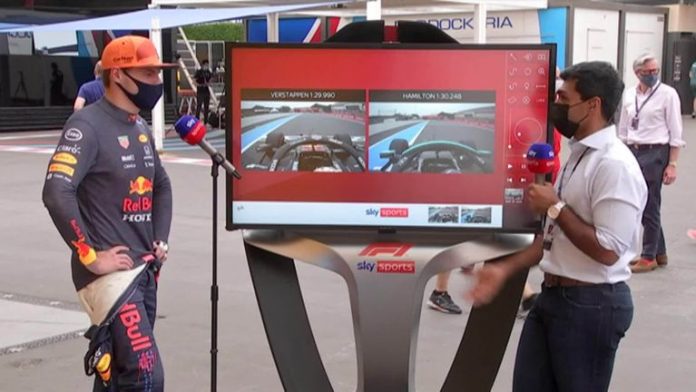 Hamilton overcomes practice difficulties to make front row next to polesitter and points leader Verstappen; “It’ll be very hard to keep up with them. But it doesn’t mean we’re not going to be able to fight them,” says Hamilton; Sunday’s race live at 2pm on Sky Sports F1

EXCLUSIVE: Max Verstappen joined Karun Chandhok at the SkyPad to look back at his pole lap at the French Grand Prix

Hamilton qualified two tenths behind Verstappen for a place alongside his title rival on the front row, a position that the world champion said he felt “super grateful” about given he had been “uncomfortable with the balance” of his W12 all through practice.

But late set-up changes before the qualifying hour put the car back in a happier place, with Hamilton subsequently pleased with his performance from there to secure second on the grid.

“It was one of my cleanest sessions in terms of steady good laps,” he said. “And my last one was the best one I could do, and that’s as fast as I could go.”

Verstappen and Red Bull have certainly looked fast all weekend on the circuit in the hills above the Côte d’Azur.

Running with a lower-downforce set-up on their RB16B from Saturday morning, the Honda-powered Red Bull was able to combine strong straight-line speed with good cornering performance around the twisty 3.6-mile lap.

“They have obviously made some improvements and it’s not the same as Barcelona right now,” Hamilton told Sky F1 when asked about comparisons to the last race on a similar circuit at Barcelona’s Circuit de Catalunya last month, which he won.

“I don’t think I’ll be able to follow that closely. Their end of straight speed for some reason is mighty, so we shall see.”

Even on more difficult weekends than this, Mercedes and Hamilton have made a habit of challenging for wins when their package is not the fastest. Are they in position to do likewise here against Red Bull?

“They are generally a couple of tenths quicker on race pace,” he admitted.

“So I think it will be very hard to keep up with them. But it doesn’t mean we’re not going to be able to fight them, maybe at the beginning.

YES BOYS, POLE 🔥 It’s an amazing weekend, so far 🤘 Thanks, @redbullracing and @HondaRacingF1, really proud of you 🙏🏻 Let’s finish it off tomorrow #KeepPushing #FrenchGP 🇫🇷 pic.twitter.com/qpRgtXGb9q

Had it not been for a late tyre blowout two weeks ago in Baku, Verstappen would be chasing a third consecutive victory in France.

Instead, the slender four-point championship advantage he opened over Hamilton after winning in Monaco remains in place heading into Sunday’s 53-lap grand prix. And the Dutchman is expecting a competitive head-to-head.

“I still expect a tight race,” Verstappen told Sky F1’s Karun Chandhok during a SkyPad appearance to analyse the fifth pole lap of his F1 career.

“Of course, today we were a little bit ahead in qualifying but I think over a race run we are very closely matched.

“So it’s going to be exciting I think.”

But Verstappen does believe that Red Bull have more reason for optimism than the Spanish GP, where he led much of the race from Hamilton before being overhauled.

“I think it will be a little bit different here,” predicted Verstappen. “We do have good pace but time will tell if it’s going to be good enough.”