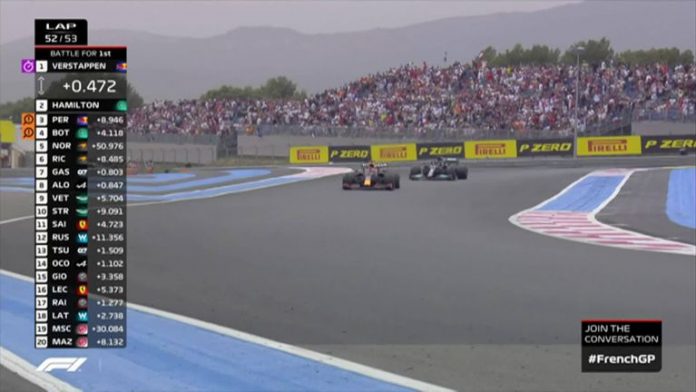 Lewis Hamilton falls 12 points behind Max Verstappen in the championship after being overhauled by his Red Bull rival late on at Paul Ricard; Mercedes explain why Valtteri Bottas flat-spot triggered early tyre changes

Lewis Hamilton believes Red Bull are “just too quick now” with Mercedes needing to respond to their rivals’ step forward in pace after losing out to Max Verstappen in the French GP.

On a topsy-turvy and tense afternoon at Paul Ricard which saw the championship’s top two switch position four times, Hamilton was ultimately overtaken by Verstappen on the penultimate lap as the Red Bull driver made a two-stop strategy work to perfection.

Hamilton, who had struggled with his car on Friday, said he was not left downhearted by second place, but he said the race underlined the improvement he feels Red Bull have made as they extended their points leads.

“I think there are lots of positives to take from today so I’m not necessarily seeing it as a tough day,” Hamilton told Sky Sports F1.

“I did everything I could out there today. I didn’t really make any mistakes, and generally happy with the position and result, but of course it would be nice to win.

“But those guys are just too quick now. They have taken a big step this weekend. We are losing three and a half tenths just on the straights, so I think they have made some sort of improvement. We’ve got to figure out whether it’s just rear wing or engine. Either way we’ve got to improve.”

Hamilton started second to Verstappen on the grid but found himself in the lead coming out of Turn Two after his Dutch rival outbraked himself and ran wide.

But Red Bull then successfully ‘undercut’ the lead Mercedes at the opening stops, despite Hamilton having held a three-second lead over Verstappen before then.

“If he hadn’t made a mistake in the beginning, the result would have been the same,” insisted Hamilton. “The only reason we had the position is because he made a mistake and I managed to just about stay ahead.

“But we are quite slow in a straight line, as I said, and ultimately they stopped before us so there was no reason to stop after that. Just going to hold on to it and see if we can stay out in front but unfortunately it didn’t work.”

Speaking about the timing of his first stop, Hamilton said: “We were supposed to stop much, much later than we did. So we were already stopping earlier and it’s a long second stint.”

On his slow-down lap after the end of the race, Hamilton was told by James Vowles, the team’s strategy director, that “this one’s on us”, in apparent reference to them losing track position to Verstappen at the opening stops.

“It went back and forwards,” explained Toto Wolff, Mercedes’ team principal. “We were in the lead because Max made the mistake, so that was a bit inherited. Then our pace was good. Probably a little bit of margin even, then we had just about three seconds gap to protect the undercut, but it wasn’t enough.

“We are lacking a second and somewhere we lost it.”

Wolff said Mercedes had “no choice” but to initiate the stops for the leaders after Bottas, who was running third, flatspotted his medium tyres and needed a fresh set. Red Bull then responded with Verstappen on the next lap, but Hamilton ran an extra tour and lost the lead despite his advantage.

“Valtteri’s tyre had started to have a vibration and towards the end we were really worried the vibration came through the suspension,” revealed Wolff.

“So he could have had a failure at any time because he had flatspotted the tyres. We knew that we are going to trigger the stops too early, but no choice.”