Home Sport Saracens bounce straight back into the Premiership 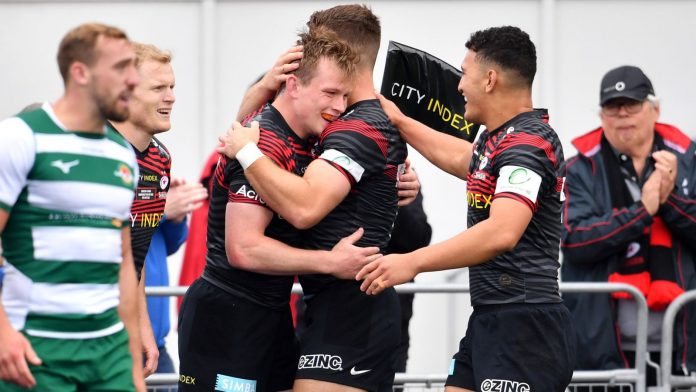 Saracens were relegated from of the Premiership at the end of last season as punishment for breaking salary cap rules; Mark McCall’s side beat Ealing Trailfinders 60-0 in first leg of play-off final and triumphed 57-15 in second leg to make immediate return to the top flight

Saracens rubber-stamped their return to the Gallagher Premiership with a 57-15 victory over Ealing after successfully hitting the reset button on a poor first half at StoneX Stadium.

All five of the club’s British and Irish Lions including England captain Owen Farrell were replaced in the 54th minute, their job done after a 10-10 interval stalemate vanished before an avalanche of points in the third quarter.

The South African-bound Lions received a standing ovation as they departed having come through the Greene King IPA Championship final second leg unharmed, while Springbok prop Vincent Koch also followed them into the stands in anticipation of the battles ahead this summer.

It was Koch and two of Warren Gatland’s tourists – Elliot Daly and Jamie George – who propelled Saracens out of sight immediately after the break with a flurry of three tries in 10 minutes.

Ealing had displayed spirit and endeavour until that point and were a substantial improvement on the side that capitulated 60-0 in the first leg last Sunday, but once more they were outclassed and this clash in front of a 2,000 crowd turned into another procession.

Saracens’ one-year exile from the Premiership as punishment for repeated salary cap breaches has ended at the earliest possible opportunity, but the final day of the Championship season was marred by a red card shown to Michael Rhodes.

Rhodes was playing his final match after seven years at the club but he was shown a red card in the 50th minute for a high tackle.

The pre-match applause for Rhodes as he bade farewell after seven years at Saracens quickly gave way to shock when Ealing surged ahead inside the opening minute through a penalty try.

Jackson Wray, the eventual man of the match, was to blame as he missed the kick-off and then deliberately knocked the ball dead, resulting in the try being awarded and a yellow card for the openside.

Ealing were showing far less respect than a week ago when they waved their star-studded opponents through from the start, but they were unable to turn half-chances into points.

Nick Tompkins and Alex Lewington threatened briefly and although Saracens were starting to take control, they still trailed 10-3 as the half-hour mark passed.

That changed when the pack took control from a line-out with Mako Vunipola crashing over, Ealing totally overpowered by the well-drilled set-piece attack.

Farrell added the conversion to level the score at half-time and the momentum now was fully behind Premiership-bound Saracens, who nearly scored through Sean Maitland as the interval approached.

And just 67 seconds into the second half they underlined the shift in balance when strong carries from Billy Vunipola and George sucked in defenders to allow Lewington to set up a try for Daly.

Koch surged over shortly as Saracens began to canter out of sight and when George crossed as the driving line-out proved unstoppable once more, Ealing faced the prospect of another heavy defeat.

Tompkins was the next to break the whitewash before the superb Lewington weaved a path over the line, Saracens gaining new purpose with a host of new arrivals off the bench.

The scrum forced a penalty try in the 71st minute and replacement back Tom Whiteley had the final say for the home side by touching down late on.