Home Culture Kevin Hart does ‘Fatherhood’ and more to watch 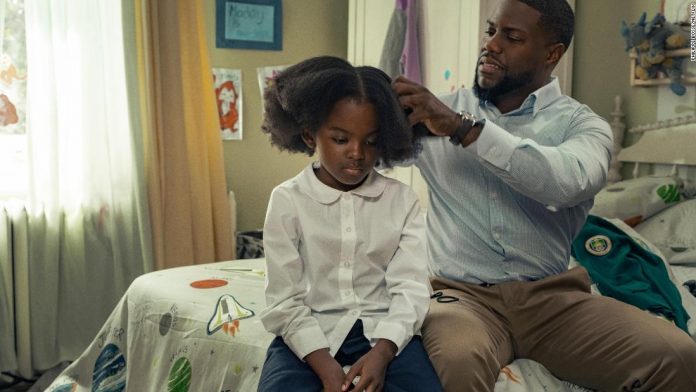 Not everyone is blessed to have a dad. Sunday’s holiday marks my first since we lost my father, Gary Respers Sr., to Covid-19 in February.
There are some whose fathers are still alive but not active in their lives, for whatever reason.
Others will spend the day celebrating with their dads.
I’m holding space for all of you, no matter what your circumstances may be.
And I’ve got some content to help you either mark the holiday or decompress from it — whichever you need.

‘Fatherhood’
Get ready to laugh and cry.
More from Pop Life Chronicles
Comedic actor Kevin Hart plays a father who is left to raise his newborn daughter alone after a tragedy in this Netflix film, based on a memoir written by Matthew Logelin.
Leave it to Hart to bring some funny to a heartbreaking plot — and Netflix has timed the project perfectly for Father’s Day.
The film costars Alfre Woodard and Lil Rel Howery.
“Fatherhood” starts streaming on Friday.
‘iCarly’ reboot
C’mon, nostalgia!
The former hit Nickelodeon teen sitcom is back nearly nine years after the series finale.
Miranda Cosgrove reprises her role as Carly Shay, who in the original series was a teenager starring in her own Web series.
In the new series, Carly and her crew are back together and trying to navigate their 20s.
The new “iCarly” debuts Thursday on Paramount+.
‘Simone vs Herself’
Facebook Watch is getting us into the Olympic spirit.
“Simone vs Herself” is a seven-episode series that “will follow the journey of one of the greatest athletes of all time as she seeks to further challenge herself and what is possible as a gymnast.” The docuseries goes behind the scenes as Biles continues to strive for excellence.
“A 19-time World Champion and four-time Olympic gold medalist, Simone has already reached the mountaintop,” according to the news release. “But as the series will reveal, there are peaks left to scale while balancing adversity — from adjusting to a postponed Olympics to conquering the challenges that come with success and the weight of enormous expectations.”
It debuted Tuesday.

Monsters, unite!!
Lady Gaga’s “Born This Way: The Tenth Anniversary” is out Friday, and it’s a good reminder of how many hits she has gifted us with.
The new version includes all 14 tracks from the 2011 album with six alternate versions, reimagined by LGBTQIA+ artists and advocates. It’s just one example of her constant support of that community, which has fully embraced the pop icon.
The album drops Friday.
Juneteenth happens on Saturday, and in honor of it, musical artist BLKBOK is dropping his “Black Book” album.
The holiday celebrates the emancipation of those enslaved in the US.
A neoclassical pianist who has performed with the likes of Rihanna and Justin Timberlake, he said the album “is a series of musical poems that illustrate my thoughts, emotions, and perspectives of the social climate that we live in, stories of my personal relationships, and an opportunity to view the world through the keys of the piano.”

Ahhhhh, diversity.
It’s a topic not unfamiliar to the regular readers of this newsletter.
This week, we learned that people will complain if they feel like there is not enough diversity in a diverse project.
Such was the case with Lin-Manuel Miranda’s latest film, “In the Heights.”
While it focuses on the Latinx community and is set in the heavily Latino New York City neighborhood of Washington Heights, there were complaints the film wasn’t representative enough of Afro-Latinos with dark skin in lead roles.
Miranda posted an apology on Monday.
“In trying to paint a mosaic of this community, we fell short. I’m truly sorry,” he wrote.
Which begs the question: When everyone seems focused on representation, is it even possible to fully represent everyone?

Speaking of, model Gigi Hadid sounds like she is feeling a way about people not understanding her identity.
In an interview with i-D, the new mom (she welcomed a daughter with singer and former One Direction member Zayn Malik last September) was asked about her parenting style, which included a thought about raising biracial children.
“In certain situations, I feel — or I’m made to feel — that I’m too white to stand up for part of my Arab heritage,” said Hadid, whose real estate magnate father, Mohamed Hadid, is of Palestinian descent. “You go through life trying to figure out where you fit in racially.”
Hadid’s sister Bella, who is also a model, made headlines last month after she documented participating in a pro-Palestine protest rally.
Gigi Hadid told i-D she asks, “Is what I am, or what I have, enough to do what I feel is right?”
She continued, “But then, also, is that taking advantage of the privilege of having the whiteness within me, right? Am I allowed to speak for this side of me, or is that speaking on something that I don’t experience enough to know?”
Hadid added that she believes her daughter, Khai, “will grow up feeling out the way that she can or wants to be a bridge for her different ethnicities.
“But I think that it will be nice to be able to have those conversations, and see where she comes from (with) it, without us putting that onto her,” she said. “What comes from her is what I’m most excited about, and being able to add to that or answer her questions, you know?”