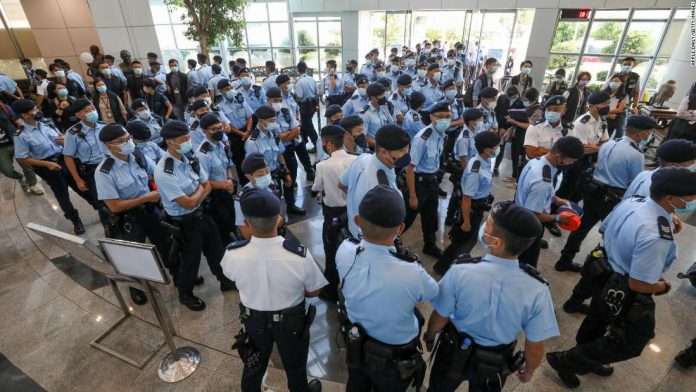 “This has sent shudders through the industry,” Elaine Yu, a Hong Kong-based reporter for the Wall Street Journal, told CNN’s Chief Media Correspondent Brian Stelter on “Reliable Sources” Sunday. “It raises important new questions about how media outlets can report on topics that are now considered highly sensitive.”
Apple Daily’s CEO Cheung Kim Hung, COO Chow Tat Kuen and chief editor Ryan Law, along with the deputy chief editor and online editor were all arrested and accused of colluding with foreign forces to endanger national security, the news company said Thursday. This was a provision of the sweeping legislation introduced last year that banned sedition, secession and subversion against Beijing.
The publication live-streamed the early morning raid on its Facebook page, showing police asking staff to show proof of identity, and blocking them from returning to their desks.
The arrests and probe are the latest step in an escalating crackdown against the provocative, anti-Beijing tabloid, which has become the poster child in Hong Kong for media freedom in what many analysts argue is an increasingly hostile landscape for the industry.
Stelter spoke to Mark Simon — Apple Daily’s chairman Jimmy Lai’s assistant — who is currently wanted by Hong Kong authorities. “Unfortunately, if I was in Hong Kong, I’d probably not be out in public and able to do a television show,” he told Stelter. Lai is currently in jail, but Simon said the publication will still keep operating for as long as possible.
When it comes to running the newsroom, the problem is not “we don’t have funds,” Simon said, but that the Secretary of Security and the police will not let the news outlet pay reporters, staff or vendors. “They have locked up our accounts,” he said.
“Many media groups here are also saying it’ll get harder for reporters to get people to talk to them because the police can now potentially seize reporters files and devices through a court warrant,” Yu told Stelter. She added that this happened for the first time a few days ago. “Government critics and other people could become scared of talking to the media” she said. “This has wide, wide reaching consequences.”
— CNN’s Eric Cheung contributed to this report