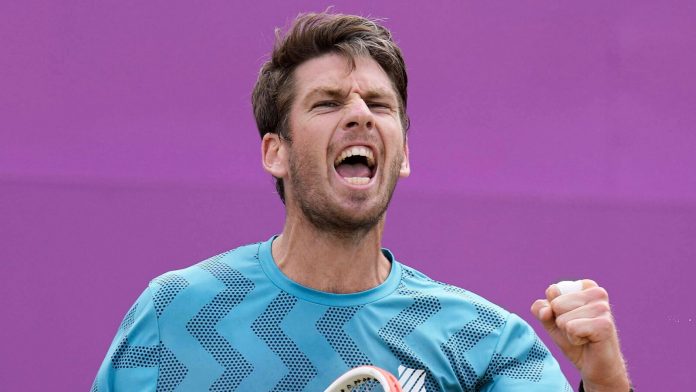 Cameron Norrie was bidding to become only the second Briton after Andy Murray to win the Queen’s Club title in the Open era; the 25-year-old will now be seeded at Wimbledon for the first time in his career after rising to a career-high of 34th in the world

Cameron Norrie insists he’s excited about the prospect of being seeded at Wimbledon for the first time in his career, following his run to the final at Queen’s Club.

Norrie was bidding to become only the second Briton after Andy Murray to win the Queen’s title in the Open era, but he was beaten 6-4 6-7 6-3 by Matteo Berrettini in his first grass-court final on Sunday.

The big-serving Italian had already accounted for Murray and Dan Evans in reaching the final, and he defied a spirited fightback from Norrie to become the first debut winner at Queen’s since Boris Becker in 1985.

Norrie – also a runner-up in Estoril and Lyon in May – was the only player to take a set off the world No 9 at the cinch Championships, but an untimely break of serve at 4-3 in the final set denied him a first ATP Tour title.

“I think I had a little sniff of a chance in the start of the third set, and I was slightly too aggressive on a forehand at 15-All, and it was just such small margins against a player like that.

“I’m really pleased with how I played. [He] was just too good in the end. Couple of lapses in concentration. That was it,” Norrie reflected in his post-match press conference.

The 25-year-old had never won a match at Queen’s prior to this year, but he continued his terrific form to register victories against the seeded duo of Aslan Karatsev and Denis Shapovalov.

His semi-final victory over second seed Shapovalov was his 15th win over a higher-ranked opponent in 2021 – his 29th singles success in total.

This parachutes him to a career-high of 34th in the world and ensures he will be seeded at his home Grand Slam for the very first time, due to the absence of Rafael Nadal and Milos Raonic.

“It is obviously exciting to be seeded. I think I was in some of my best form as well in Lyon, so heading into the French Open I was feeling very confident there,” he admitted.

“Definitely a week like this helps to feel like you’re ready, and especially on the movement side of things on the grass.

This time next week… #Wimbledon pic.twitter.com/4gx6Y0zAxd

“It was massive for me to make the final and then to pick up that seeding, so that’s obviously huge too. Then knowing that you’re not going to get drawn against one of the top guys to start is another bonus.”

The British No 2 has reached the third round at both the Australian Open and French Open this year, and his spirited display against the indomitable Nadal at Roland Garros earned him plenty of plaudits.

He has only registered a solitary victory in his previous three Wimbledon appearances, but buoyed by his performances at Queen’s Club, he’ll be confident of breaking new ground.

“It’s good to have so many matches on the grass. It’s been a great week for me. I’m happy with how it all went and having that amount of time on the match court as well.

“I’m looking forward to the rest of the year. I know that my favourite surface is the hard, so I’m most comfortable on that. We’ll see.”