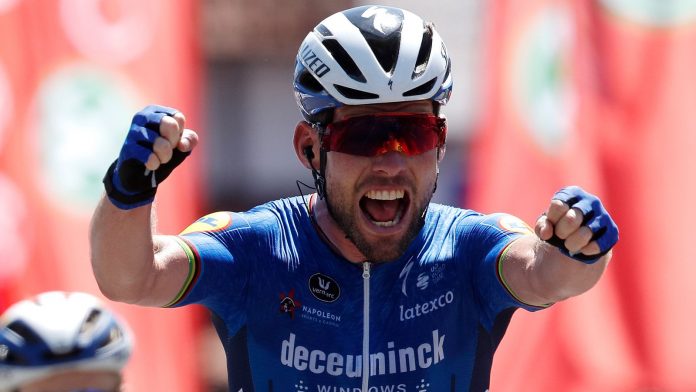 Mark Cavendish has won 30 Tour stages – second only to Eddy Merckx; Last year’s green jersey winner Sam Bennett misses out due to injury; Cavendish: “I am excited to be going back to a race that I have such an affinity with and where I have so much history.”

Mark Cavendish will return to the Tour de France for the first time since 2018 after being named in Deceuninck-QuickStep’s eight-man squad for the race, which begins on Saturday.

Cavendish, whose 30 Tour stage wins are second only to Eddy Merckx, was included because Irishman Sam Bennett has been ruled out through injury – and will therefore be unable to defend the green jersey which he won in last year’s race.

Cavendish, 36, has enjoyed a resurgence in form this year, winning four stages of the Tour of Turkey in April and the final stage of the Belgium Tour earlier this month.

He said: “I am delighted to be going back to the Tour de France with Deceuninck-QuickStep.

“Obviously, the circumstances with Sam could be better – he had a special Tour last year and I am sad for him not being able to defend his green jersey.

“But at the same time, I am excited to be going back to a race that I have such an affinity with and where I have so much history.

“It is the biggest bike race in the world, and I am going to do all I can to grab this opportunity with both hands.”

Bennett, 30, enjoyed an outstanding Tour last year, claiming two stage wins – his first in the race – before unexpectedly dethroning Peter Sagan in the points classification, a competition the Slovakian has dominated since 2012.

However, the same injury which saw him ruled out of the Belgium Tour will now bar him from the biggest race of all.

“Needless to say, I’m very disappointed to not be able to defend my green jersey at this year’s Tour de France,” Bennett said.

“I had a very minor incident during training a couple of weeks ago, which affected my knee.

“While the injury I sustained is very short-term, it impacted my training for the biggest bike race in the world all too much and left me without enough time to be race fit.”