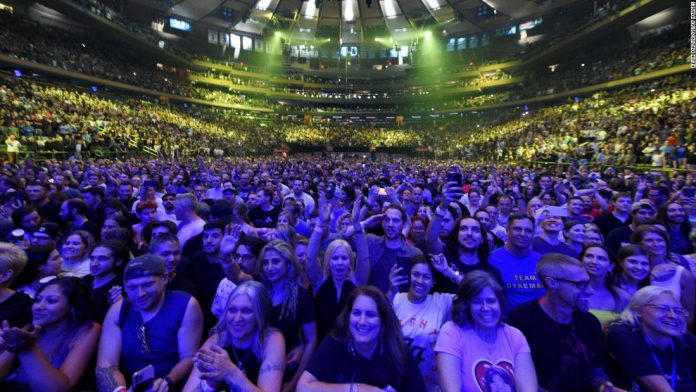 It was The Garden’s first concert since the coronavirus pandemic shuttered venues in New York City in March 2020.
The band and frontman Dave Grohl kicked off the show with “Times Like These,” with cheers from the crowd. They launched into “The Pretender” and Grohl stopped multiple times to ask the crowd, “Did you miss it?”
At one point, Chappelle joined the band on stage to sing Radiohead’s “Creep.”
The show was for a vaccinated audience only and was the first 100 percent capacity concert in a New York arena since the start of the pandemic.
“We’ve been waiting for this day for over a year,” Grohl said in a statement.
The Foo Fighters have additional summer concert dates planned for their “25th-26th Anniversary Tour” later this summer.
Chappelle also announced two dates with Joe Rogan on Sept. 3 in Nashville, TN. and Sept. 4 in New Orleans, LA.

Belarus sprinter says family feared she would be sent to psychiatric...