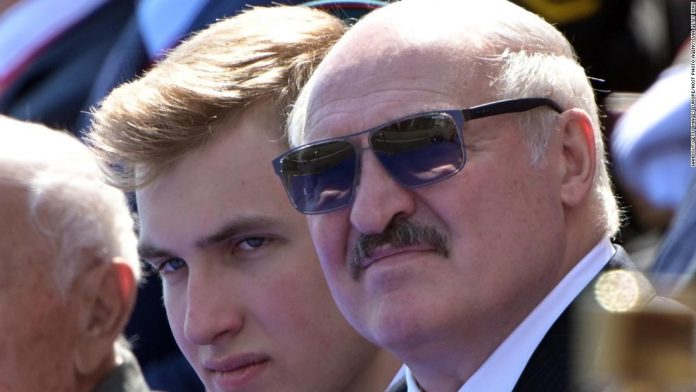 In a joint statement, the partners said they were “united in our deep concern regarding the Lukashenka regime’s continuing attacks on human rights, fundamental freedoms, and international law.”
“Today, we have taken coordinated sanctions action in response to the May 23rd forced landing of a commercial Ryanair flight between two EU member states and the politically motivated arrest of journalist Raman Pratasevich and his companion Sofia Sapega, as well as to the continuing attack on human rights and fundamental freedoms,” the statement said.
Pratasevich, a critic of Lukashenko, was arrested after his Ryanair flight from Greece to Lithuania was forced to land in Minsk. The diversion of the flight and his arrest sparked international outcry, and Pratasevich’s appearances on Belarusian state television have prompted opposition members and observers to suggest he showed signs of being tortured.
In a separate statement Monday, US Secretary of State Antony Blinken announced visa restrictions on 46 officials “for their involvement in undermining or injuring institutions in Belarus, making these individuals generally ineligible for entry into the United States.”
“These individuals hold key positions in the Presidential Administration, State Security Committee of the Republic of Belarus (Belarusian KGB), Ministry of Internal Affairs, Investigative Committee, Ministry of Information, Ministry of Sport and Tourism, State Border Committee, Ministry of Health, Constitutional Court, Prosecutor General’s Office, and district courts in Minsk,” he said.
The US Treasury Department sanctioned an additional 16 individuals and five entities, including Lukashenko’s press secretary and his former chief of staff, who currently serves as chairperson of the Council of the Republic of the National Assembly.
“The persons designated today have harmed the people of Belarus through their activities surrounding the fraudulent August 9, 2020, presidential election in Belarus and the ensuing brutal crackdown on protesters, journalists, members of the opposition, and civil society,” the Treasury Department said in a press release Monday.
US Ambassador to Belarus Julie Fisher told lawmakers in early June that new sanctions were coming “soon,” and one source told CNN that the Biden administration attempted to announce these sanctions during President Joe Biden’s first international trip — before he met with Russian President Vladimir Putin — but the EU was unable to get on the same timetable and the US decided to wait and move alongside its allies. Biden said in a press conference following the meeting that he discussed Belarus during his meeting with Putin in Geneva.
The European Union announced sanctions on 78 Belarusian individuals and eight entities on Monday after a Foreign Affairs Council meeting attended by Belarusian opposition leader Sviatlana Tsikhanouskaya.
“Seven individuals and one entity subject to this new round of restrictive measures were designated in connection to the forced and unlawful landing of a Ryanair flight in Minsk, Belarus, on 23 May 2021, endangering aviation safety, and the detention by Belarusian authorities of journalist Raman Pratasevich and Sofia Sapega. Among those targeted are also several prominent business figures who support and benefit from the Lukashenko regime,” the Council of the EU said in a statement.
The Canadian Foreign Ministry announced sanctions on 17 individuals and 5 entities.
The UK imposed sanctions on seven individuals and one entity “in response to the detention of journalist Roman Protasevich and Sofia Sapega following the unlawful diversion of Ryanair flight FR4978 in May 2021,” the Foreign and Commonwealth Office said in a statement,
“4 individuals and 1 entity have also been designated in response to the continued suppression of democracy and human rights in Belarus by Lukashenko and his regime,” it said.