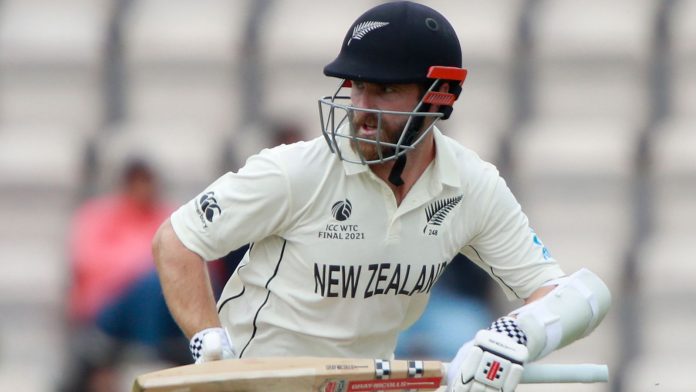 World Test Championship Final goes to sixth day with India and New Zealand still harbouring hopes of victory; Kane Williamson’s restrained 49 from 177 balls helps New Zealand lead by 32 on first-innings amid Mohammed Shami’s 4-76; India close on 64-2 with lead of 32 but lose both openers

India and New Zealand still have a chance of forcing victory on the potentially thrilling sixth and last day of the World Test Championship Final at The Hampshire Bowl.

India closed an absorbing fifth day on 64-2, with a lead of 32, and a positive result remains possible with the reserve day, which will feature a maximum of 98 overs, having been activated after a weather-hit affair.

Black Caps captain Kane Williamson (49 off 177) played a brilliantly watchful knock while India seamer Mohammed Shami (4-76) ripped through his team-mates as New Zealand carved out a first-innings lead of 32 by scoring 249 in Southampton.

Williamson’s men now look the likeliest winners with Tim Southee dismissing India openers Shubman Gill (8) and Rohit Sharma (30) lbw with excellent in-swingers before stumps, having worked them over with out-swingers.

New Zealand will hope to skittle India and knock off a cheap target on what is set to be a sunny Wednesday, with Virat Kohli – who is unbeaten on eight – perhaps eyeing a declaration and a late-day dart at the Kiwis if his team can score quickly and get far enough in front.

The draw remains the heavy favourite – a result which would see the trophy shared – which the inclement weather on the South Coast having wrecked large portions of the inaugural final.

Days one and four were completely wiped out by rain, while the entertaining days two and three were trimmed by bad light.

There was frustration early on day five, too, with light drizzle delaying play by 60 minutes but when the action did get underway at 11.30am, with New Zealand on 101-2, and trailing India’s first-innings total of 217 by 116 runs, there was an engrossing two hours before the lunch break.

The first hour saw just 13 runs scored in 16 overs as the steady Williamson – who scored just 15 from the first 100 balls he faced in his knock – dug in and the out-of-sorts Ross Taylor (11) somehow survived a testing examination from India’s pacemen, with Shami particularly impressive.

Kane Williamson’s slowest ever half-century in Test cricket was 166 balls. He falls one short of the landmark, but this was historic levels of caution for the Kiwi skipper. #WTCFinal

India finally got their rewards after the drinks break, snaring three wickets in 7.1 overs after pitching the ball fuller, with Taylor (11), Henry Nicholls (7) and BJ Watling (1) removed as New Zealand slipped from 117-2 to 135-5.

Taylor drove a pitched-up ball from Shami outside off stump to short cover where Shubman Gill took an excellent leaping catch to his right, while Watling – playing his 75th and final Test – also fell to Shami, bowled by a ball that nipped away a touch to hit the top off and middle stumps.

Shami’s wickets sandwiched Ishant Sharma (3-48) nicking off the left-handed Nicholls from around the wicket with a fine ball that angled in and then moved away – Rohit diving across Pujara in the cordon to snaffle the catch as New Zealand headed in for lunch trailing by 82.

Shami snared a third wicket after the break, trapping Colin de Grandhomme (13) lbw with a nip-backer from wide of the crease, with the Black Caps 162-6 at that stage and India sensing a first-innings advantage.

However, Kyle Jamieson (21 off 16) and Tim Southee (30 off 46) added the brawn to Williamson’s ballast – Southee creaming two sixes and Jamieson one – with their cameos helping New Zealand score at a quicker rate and put on 87 for their last four wickets.

Williamson hit the boundary, off Shami, that took New Zealand into the lead but then missed out on a 33rd Test fifty when he played away from his body and steered Ishant to Kohli at second slip to become eighth man out.

The Kiwi captain falls one short of a half century, edging Ishant to Kohli at second slip to end his remarkable 177-ball innings!

Shami had earlier bounced out Jamieson a ball after the skyscraping New Zealander had thumped him for six, while Ravindra Jadeja did similar with Southee, bowling him off his legs to end the New Zealand innings a delivery after being mowed for a massive maximum over midwicket.

Neil Wagner (0), who was caught behind by Ajinkya Rahane off Ravichandran Ashwin (28), failed to score but Trent Boult did smash a boundary before ending seven not out as New Zealand hit a further 28 runs after the dismissal of Williamson.

Southee followed his fireworks with the bat by making the opening breakthrough in India’s second innings, pinning Gill (8) lbw with a full in-swinger after the opener played all around his front pad.

Rohit then shouldered arms to a length in-swinger from Southee to depart 15 minutes before stumps, with his replacement Kohli – who was clattered on the helmet by a Southee bouncer – and Pujara (12no off 55) steering India through to the close, setting up a fascinating finale on Wednesday.

Watch day six of the World Test Championship final between India and New Zealand live on Sky Sports Cricket from 10am on Wednesday.

Goodwood next plan for Wonderful Tonight