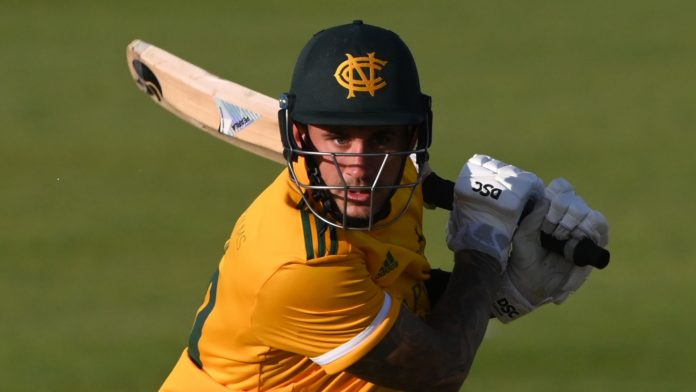 Notts top North Group in Vitality Blast as Samit Patel’s record-breaking bowling and Alex Hales’ boundary-laden innings see off Worcestershire; Patel takes 3-4 for the most economical bowling figures in Blast history on a night on which Gloucestershire and Leicestershire also win

Alex Hales hammered 60 not out from 24 balls and Samit Patel broke a Vitality Blast record as Notts Outlaws thrashed Worcestershire Rapids by 10 wickets to move top of the North Group.

Hales – on the day England white-ball captain Eoin Morgan said he could yet make an international return – thumped 11 fours and two sixes as Notts coasted past Worcestershire’s lowly 86-8 in just 6.2 overs to move onto 10 points from seven games.

Hales went 4-4-6-4-6 off New Zealand spinner Ish Sodhi in the third over of the chase as he dominated an unbroken stand of 89 with Joe Clarke (26no off 14) – but the night was memorable for Patel’s bowling as well as Hales’ pyrotechnics.

“Fearless. Skilful. Exceptional.’@Samitpatel21 was quick to lavish praise on teammate of 14 years, @AlexHales1 after the #Outlaws routed the Rapids.#BeMoreOutlaw pic.twitter.com/cC76MzMUXx

Patel took 3-4 from four overs as he recorded the most economical four-over spell in English T20 history, with the spinner dismissing each of the Rapids’ top three – Riki Wessels (2), Brett D’Oliveira (0) and Tom Fell (3).

The 36-year-old claimed his 100th T20 wicket at Trent Bridge alone when he had Fell stumped by Tom Moores, while seamer Jake Ball snared career-best T20 figures off 3-17 as Worcestershire were limited to their joint second-lowest total in T20 history.

The most economical four over spell in the history of the T20 Blast from the one and only #naturalbornthriller. #BeMoreOutlaw pic.twitter.com/LC3GS9wYBN

Batting at number seven in only his fifth county match, Kimber smashed 53 from 28 balls with three fours and three sixes to see his side to 174-8.

Derbyshire were bowled out for 132 in response with two wickets each for Naveen-ul-Haq, Callum Parkinson, Colin Ackermann and Scott Steel.

What a way to bring up your maiden @VitalityBlast half-century! 🥰

Kent’s 147-7, built around 43 from Zak Crawley and Jordan Cox’s unbeaten 36, always looked insufficient, all the more so when Gloucestershire openers Miles Hammond (33) and Chris Dent (37) put on 54 in five overs.

Ian Cockbain retired hurt after hitting 30 from 17 balls but Phillips hit three fours and three sixes in his 25-ball blast to finish the job with more than six overs to spare.

Finally, Sussex Sharks’ game against Glamorgan was abandoned without a ball bowled as a wet outfield put paid to proceedings, meaning Sussex have now endured three washouts in a row.

Watch Surrey vs Middlesex in the Vitality Blast live on Sky Sports Cricket from 6.15pm on Friday.