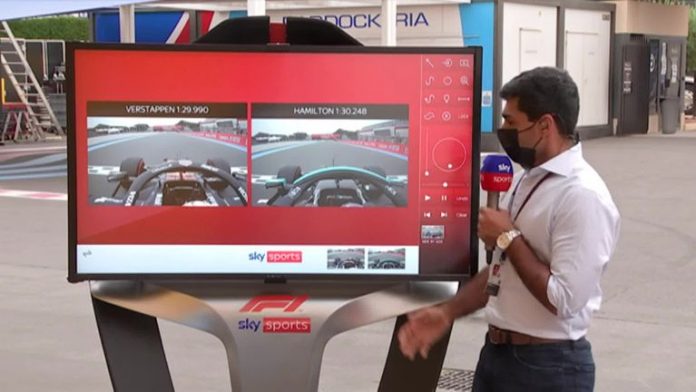 Red Bull head to their home track in Austria for consecutive races on the back of three wins in a row; Lewis Hamilton says ‘power-hungry’ circuit will favour Red Bull, who have denied claims they have made a step with engine; Watch Styrian GP on Sky F1 this weekend

Lewis Hamilton fears Red Bull may be too quick for Mercedes on their “power-hungry” home track in Austria this weekend, although the title leaders have denied claims they have made a “huge step forward” with their Honda engine.

On the back of a statement French GP win – their third race victory in a row – Red Bull hold all the F1 2021 momentum heading into consecutive races at their Red Bull Ring circuit, starting with the Styrian GP this weekend.

A high-speed track with three straights and only eight corners, it hasn’t always suited the home team’s package – but Hamilton has predicted a change for this year after claiming Red Bull were “three and a half tenths” faster than Mercedes on the straights at Paul Ricard.

The seven-time world champion, now 12 points behind Max Verstappen in the standings, doesn’t see why there wouldn’t be a repeat in Austria.

“It’s a power-hungry circuit, it’s got those long long straights, so we could see something similar [to France] – obviously with the straight-line speed of the Red Bull,” Hamilton said on Sunday night.

“But we’ve got three days to try and see if we can make any adjustments and improvements and maybe if we maximise absolutely everything maybe we can give them a run for their money.”

Hamilton added that he was unsure whether Red Bull had gained a straight-line speed advantage through their “rear wing or engine”. Red Bull used a low-downforce rear-wing set-up in France to good effect while also debuting a new Honda engine, their second of the season.

But Mercedes boss Toto Wolff suspected the engine was key to Red Bull’s charge, stating: “They have made a huge step forward with their power unit. And their race car is good, no doubt about that.”

“I don’t know what he’s referencing there,” he said.

“This is the same specification as the first unit. We’ve run a much smaller rear wing, so that’s why the straight line performance was strong.

“I think Honda are doing a great job, but we don’t see a sudden significant increase in power.”

Claiming victories on the street circuits of Monaco and Baku before beating Mercedes on their happy hunting ground of Paul Ricard, Red Bull are on a three-race winning streak for the first time since 2013.

And this run is also very rare for Mercedes, who have only once before been on a win drought as long as this in the hybrid era. They have never waited four races for victory in that time, and will be desperate to hit back this weekend.

Speaking in the team’s race preview, Wolff sounded confident that Mercedes, who were evenly matched with Red Bull on race pace on Sunday, could take another step forward at the Styrian GP.

“We’ve debriefed France and understand the areas where we have the opportunity to improve,” said Wolff. “So, now it’s all about focusing on bringing those improvements to the next two rounds in Austria, where hopefully we can swing the positive momentum back in our favour.

Lewis Hamilton feels second place was the best he could achieve in France after claiming Red Bull’s Max Verstappen was just too quick.

“Thankfully, we don’t have to wait long for our next chance to try and do that and I can see the determination in every member of the team.”

Mercedes won both Austria races last year but before then hadn’t triumphed there since 2017.

And Wolff added: “Austria has been a tricky circuit for us in past seasons, but we went well there last year. We know the situation is very different this season, though.

“It’s a very quick lap and a short circuit, with fewer opportunities to gain time. The margins are going to be tight, so we’ll give it maximum attack!”