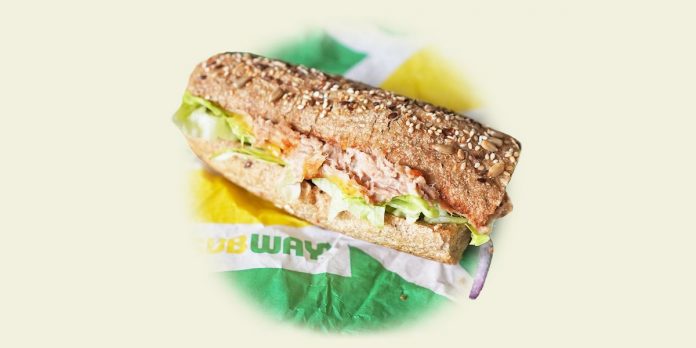 Every week day, my mom picked me up from middle school and took me to a gas station, where I got to pick out a snack. It usually consisted of a large, packaged pickle and one (1) Tijuana Mama pickled sausage. On one particular day, I sat in the passenger seat of her Dodge Intrepid and, for the first time, read the ingredients on the package. She stopped me. “Don’t do that,” mom said. “You’re going to ruin it.” But I kept reading. The first three ingredients: mechanically separated chicken, pork, and the unnervingly vague “flavoring.”

At 12, I was forced to answer the question: can I eat this?

Since then, I have faced a number of food conundrums, from the palatability of gas station sausage to whether to order the black striped bass or the langoustine at New York’s Le Bernadin. What I’ve (mostly) settled on is that—so long as it doesn’t kill me and it tastes good—I’m game.

Game for the sausage.

Game for the langoustine.

Game for the tuna at Subway.

The last one is important because this week the New York Times published an expose about Subway tuna sandwiches. In the wake of a California lawsuit that alleges Subway’s tuna is not, in fact, tuna—which started a big debate online about who orders the tuna and why—the Times sent one of the sandwiches to a lab for DNA testing. Weeks later, the lab got back in touch with the Times to say, “No amplifiable tuna DNA was present in the sample and so we obtained no amplification products from the DNA. Therefore, we cannot identify the species.” Of course, that’s just one piece of an ongoing puzzle. Another outlet did the same investigation and found there was tuna DNA.

Truth is, if you bathed me in that much mayonnaise, you might not extract any human DNA either.

None of that is really the point. Not to conflate Catholicism with Protestantism, but I worked at a Quiznos in high school. The way their fast-food tuna is made is by combining a ton of canned tuna with a blasphemous amount of mayonnaise, tossing in some spices, and then mixing it with your (thinly gloved) hands. Truth is, if you bathed me in that much mayonnaise, you might not extract any human DNA either. It was my favorite job because it was equal parts gross and satisfying. And yet, it’s good. No, it’s delicious.

But hearing that Subway’s tuna isn’t verifiably tuna is raising red flags for people, suggesting there’s something wrong here, suggesting they should be aghast. Listen, I’m no Subway shill. As I said, I’ve already been baptized in the way of oven toasted subs and broccoli cheddar bowls. But, like mom said, the problem is learning how the sausage is made. If the reveal of an inconclusive DNA test is enough to throw you off Subway tuna, then I have to assume you weren’t ordering it in the first place. Subway tuna has already told you who it is, coyly, from behind a glass partition. It’s flaked fish, dyed white via whipped eggs and oil, kept cool only by the lingering promise that a refrigerated table is doing its job correctly.

Want some additional information? Fast-food sandwich chicken comes chopped in a vacuum-sealed pack. The main ingredients in Chick-fil-a sauce are soybean oil and sugar. There is more Maltodextrin in Doritos than cheddar cheese. There are so many ways for the food industry to ruin your day that it will make your head spin, and that’s jut the low-end stuff. We haven’t even gotten into sit down restaurants and what does (or doesn’t) happen in the back of house.

All of that is to say, you can let the fear of the unknown chase you away from carrying on your life or you can accept that—so long as it tastes good and it’s not killing you—some of life’s mysteries are best left uncovered. Someone will confirm one day if Subway’s tuna is, in fact, tuna. But this topic is a big ol’ can that then prompts a lot of other questions. How many restaurants have you dined at that advertised Kobe beef, despite only 32 restaurants in the U.S. certified to sell it? You can come for Subway all day long, but they’re being accused of a sin rampant in the American food industry. Accused—not even found guilty.

So, I say screw the results. I’ll eat a tin of duck pâté today and hit the Subway drive thru tomorrow. I don’t care what’s in a Subway tuna sandwich. Just make it a footlong.

Humanitarian Response Plan: food is the number one need