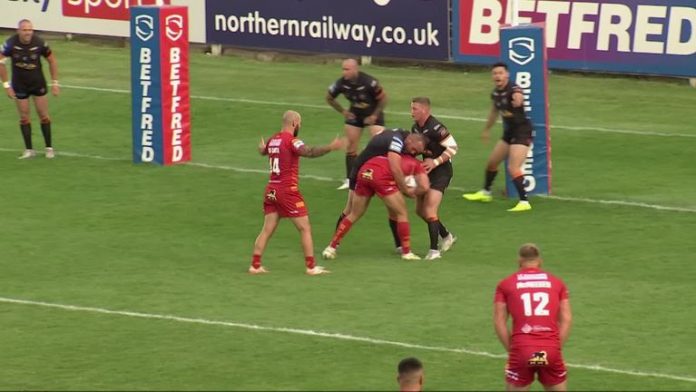 “We got the win but we certainly didn’t play well… I’m disappointed with how we’ve played the last two games. We’re sitting in a good position in terms of the league but we know how quickly that can change.”

Leaders Catalans Dragons maintained their best ever start to a Super League season with a first win at the Mend-A-Hose Jungle for nine years but coach Steve McNamara was unhappy with their performance.

The French side, who were without England duo Sam Tomkins and Tom Davies, dominated for much of the match as they cruised to a 16-6 defeat of Challenge Cup finalists Castleford to extend their winning run to six matches.

“We got the win but we certainly didn’t play well tonight,” McNamara said.

“It’s been 2012 since we last won here and I know the two teams were not at strength but I’m disappointed with how we’ve played the last two games.

“I’m also pleased we ended up on the right side in terms of results. We’ve lost a little bit of rhythm but we’re scratching out the wins, which is a positive for us.

“We’re sitting in a good position in terms of the league but we know how quickly that can change.”

The Catalans return to England next Wednesday for a game against Huddersfield and are not due back in Perpignan until July 16 after their next scheduled home game against Hull KR was postponed due to a Covid-19 outbreak in the Robins camp.

A total of six Super League fixtures have so far been lost to the pandemic in 2021 but McNamara is trying to remain positive.

Highlights from the Super League clash between Castleford and Catalans.

“We need to find some solutions,” he said. “Last season was disruptive but we still ended up with a great Grand Final.

“I am sure we will get to the end point but we’re going to have to show some patience and adapt.

“Losing our next scheduled game at home is a big blow for the club. We’ve played 12 games so far and nine of them have been in England so we’ve been through a fair bit and we’re faced with two more away trips.”

Castleford have now lost five of their last six in the league but were once again well below strength.

They had Paul McShane on England duty and Peter Mata’utia and Suaia Matagi away with the All Stars and, with Jordan Turner pulling out late with a hamstring injury, coach Daryl Powell opted to start with prop Liam Watts at stand-off.

Watts battled manfully in trying circumstances but the home side struggled for creativity and were trailing 14-0 when winger Derrell Olpherts scored their only try four minutes from the end.

“I’m pretty proud of the boys,” Powell said. “Clearly we had Watts at half-back so you can see how our team looks at the moment.

“It’s frustrating from an attacking point of view but they’re the biggest team in the competition and I thought we handled them pretty well. Physically, I thought we were awesome.

“It’s difficult when you’ve got 11 or 12 players not playing, we’ve just got to hang in there.

“We’ll take a lot out of tonight’s game from the defensive point of view. We’ve got to move on to St Helens next week, when hopefully we get some players back.”

Powell says winger Jason Quarequare took part in the last training session before being ruled out as a Covid contact, while hooker Jacques O’Neill went off with a hamstring injury and second rower Alex Foster will go for X-rays after taking a bang to his face.

“It’s crazy, the amount of injuries and what we’re expecting from our players,” Powell added.