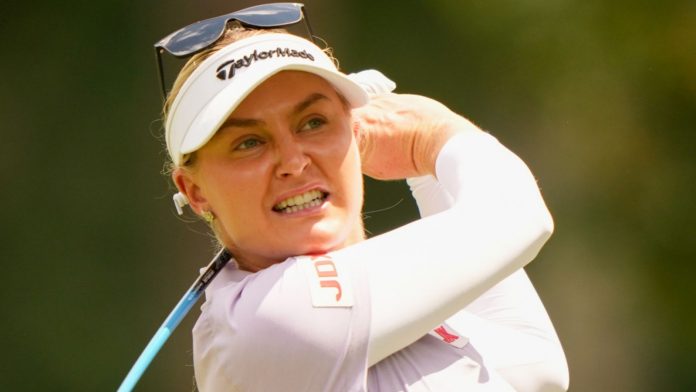 English star Charley Hull made an encouraging start to the KPMG Women’s PGA Championship as on opening four-under 68 left her just one shot off the lead, while both Jessica and Nelly Korda are in contention

Charley Hull gave herself an excellent platform to build on in her quest for a maiden major title as she ended the first day of the KPMG Women’s PGA Championship just one shot off the lead.

Hull birdied three of her last six holes and made a clutch par save at the ninth to close out a four-under 68, leaving her one behind Lizette Salas at the Atlanta Athletic Club, while both Korda sisters enjoyed encouraging first days.

Jessica Korda, playing alongside Hull, opened with a solid three-under 69, with her younger sibling Nelly firing a 70, but it was a tough day for Hull’s compatriots Georgia Hall and Mel Reid while Dame Laura Davies, who won the event for the second time 25 years ago, struggled to a 77.

Salas will sleep on the overnight lead after handing in a bogey-free 67, with Hull claiming outright second following her impressive run of birdies over the second half of her round.

Hull began with a birdie at the 10th only to run up a six at the par-five 12th, and she was one under for the day with six to play before birdies at the fourth, fifth and eighth gave her the chance to tie the first round lead.

The 25-year-old blocked her final drive into sand and then overhit her approach into the rear trap but, after splashing out to 10 feet, Hull rolled in a confident putt to remain at four under par.

“I played pretty solid,” said the Solheim Cup star. “I feel like I’m in a good head space at the minute, just out there having fun. I could have been lower, but then I holed some good putts, as well. It was good.

“I can’t actually remember much of my round, I just felt quite focused. I wasn’t even sure of my score until I looked at a leaderboard. The key one for me was probably my par save on the last. I pushed my tee shot right with my three-wood, and I’ve been struggling a lot with my bunkers this year.

“I actually hit quite a good iron bunker shot into the green, it was just a little bit too flat, it was a bit like a launch pad so it flew, and then I was on a downslope on a short-sided pin and I got up-and-down I was quite happy with that.”

Hull will now take “positive vibes” into the second round along with playing-partner Jessica Korda, who mixed five birdies with two bogeys to end the day just ahead of Race to CMS Globe leader Nelly, who capped her 70 with a monster putt for birdie at the 18th.

“It was a long putt. I’m not sure how long exactly, but it felt good to close on that one,” said Korda, winner of the Meijer LPGA Classic last week. “Didn’t really make a lot of putts today. I had four birdies in total, two of them came on par-fives that I reached in two. So it was nice to see that one go in.”

Korda was also rattled by the poor pace of play throughout her first round, and she was relieved to have good friends Lydia Ko and Georgia Hall for company.

“I think the pace of play honestly played a big part,” Korda added. “We waited on a lot of holes today. At one point, there were four groups on one hole.

“It felt like, once we hit the back nine, we just really slowed down. So when you’re waiting a lot, I feel like you’re not executing your shots as well. But I had a great group today. Lydia and Georgia are great, and they’re good friends. So it was fun.”

Ko got round in 72, but Hall did not make a birdie until the 18th and signed for a 75, with Reid one shot better after she also birdied her final hole of the day.