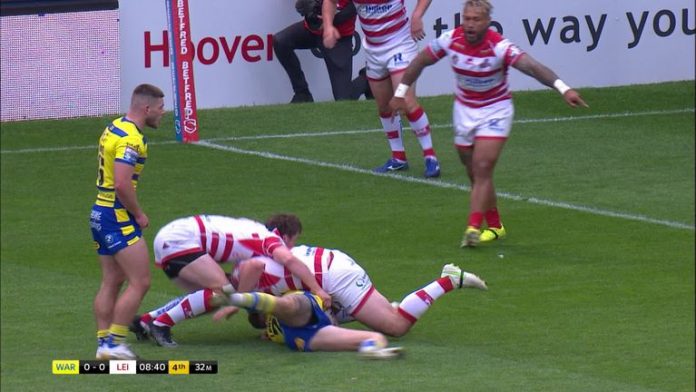 “It’s a shame Gareth didn’t get picked but from our point of view England’s loss was our gain. I was surprised he didn’t make the cut for England as I’ve said all along I believe he’s the form player of the competition.”

Steve Price said England’s loss was Warrington’s gain after Gareth Widdop starred for the Wolves, having missed out on national team selection for Friday’s clash against the Combined Nations All Stars on home soil.

Widdop claimed a personal haul of 20 points to help an under-strength Wolves side to a 44-18 Betfred Super League victory over winless Leigh.

The half-back won a recall to Shaun Wane’s England squad earlier this month but failed to make the final cut for Friday evening’s game at Warrington’s Halliwell Jones Stadium.

But the 32-year-old produced the goods for his club, scoring a try, creating another for winger Josh Charnley and landing eight goals. Blake Austin, Danny Walker, Eribe Doro, Matt Davis and Tom Lineham also touched down for the hosts.

Highlights from the Super League clash between Warrington and Leigh.

Wolves boss Price said: “It’s a shame Gareth didn’t get picked but from our point of view England’s loss was our gain.

“I was surprised he didn’t make the cut for England as I’ve said all along I believe he’s the form player of the competition.

“I know how hard Gaz has worked to put himself in that position and he’s playing great footy for our club.

“Gareth will go for scans tomorrow on his ankle as we’re not quite sure of the extent of the injury but that’s all part of the game.”

Warrington were without five key players who will be on England duty at the Halliwell Jones Stadium on Friday and in-form centre Toby King was also sidelined with a knee injury as Price was forced to ring the changes after their win over champions St Helens.

Warrington Wolves’ Eribe Doro talks to Jenna Brooks about his first Super League game of the season, which also saw him grab one of Warrington’s seven tries

The Wolves recalled Riley Dean and Ellis Robson from their loan spells at York and Bradford respectively and also brought in fellow youngsters Josh Thewlis,Connor Wrench, Ellis Longstaff and Doro.

And Price was delighted with how his young players adapted, adding: “It was a great result, there was great intent, great energy and a lot of adaptability which was pleasing.

“The future is very bright for this club and it’s in good shape with the exciting young kids coming through.

Leigh interim head coach Kurt Haggerty says his side “won’t give up fighting” after their 12th successive Super League defeat leaves them rock bottom of the table.

Danny Walker picks up the Player of the Match award after helping Warrington to victory over Leigh, 44-18

Haggerty said: “It’s difficult to keep the lads up each and every week and this group won’t give up fighting but we need to win big moments and get momentum.

“We did some good things but we lost the key moments and Warrington’s game management and end of sets was fantastic.

Check out this hit from Sitaleki Akauola as he runs through Tyrone McCarthy!

“I still felt we were in the game and that we could come back and win after the try at the start of the second half but we just lost those key moments and didn’t recover from the momentum changes.”

Haggerty reported that forward Tyrone McCarthy was knocked out after a ferocious clash with Sitaleki Akauola after just four minutes, which forced the former Warrington man from the field.

He added: “Tyrone is in a pretty bad way after a nasty clash and we will keep checking on him to make sure he’s okay.”

Everything new coming from Apple in August 2021

Ensuring the continuity and resumption of education in crisis situations

$127 million from World Bank to shore up food security and...