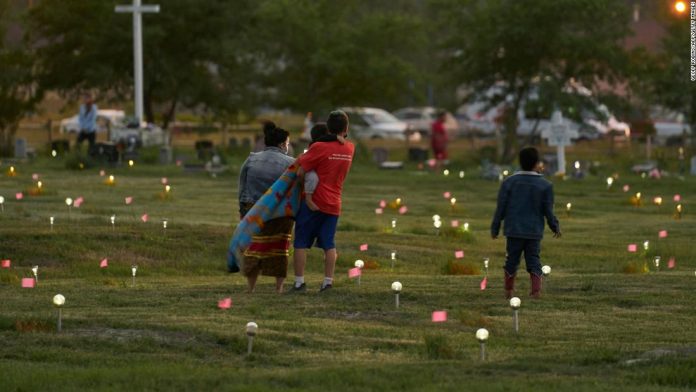 This year, though, many First Nations communities are calling for a halt to celebrations of the holiday, with some planning a more somber observance instead.
The movement to cancel Canada Day celebrations comes after hundreds of unmarked graves thought to contain the remains of Indigenous children were recently discovered at the sites of two former boarding schools in the country.
“Celebrating Canada Day is being seen as inconsiderate to all the children’s lives that were lost and we encourage everyone to consider the price these children had to pay at the hands of the Canadian government,” Federation of Sovereign Indigenous Nations Chief Bobby Cameron said in a June 18 news release.
Some cities have already canceled or postponed their Canada Day plans, and pressure is now growing for Prime Minister Justin Trudeau to call off national celebrations.
Here’s where things stand.

Canada Day, observed on July 1, celebrates the joining of the country’s original three provinces (Nova Scotia, New Brunswick and Canada province, the area that is now Ontario and Quebec) as one dominion in 1867.
It’s usually marked with festivities and fireworks across the country, though not everyone sees the day as a reason for celebration. To many First Nations communities, the holiday has long represented the country’s history of colonization and violence against Indigenous people — an issue that has been a subject of national conversation in recent weeks.
At least 750 unmarked graves were found earlier this month on the grounds of the former Marieval Indian Residential School in Saskatchewan. In May, the remains of 215 children were found buried near the Kamloops Indian Residential School in British Columbia.
The discoveries are a reminder of a dark chapter in Canada’s past: the residential school system. From the late 19th to the late 20th centuries, Indigenous children were separated from their families and forced to attend government-funded, church-run boarding schools in an attempt to assimilate them and wipe out their culture.
Canada’s Truth and Reconciliation Commission released a report in 2015 detailing decades of physical, sexual and emotional abuse suffered by children in the country’s residential school system. The commission estimated that more than 4,000 died in the institutions, acknowledging that it was impossible to know the true toll.
“The recent discovery at Kamloops residential school has reminded us that Canada remains a country that has built its foundation on the erasure and genocide of Indigenous nations, including children,” the Indigenous-led activist group Idle No More says on its website. “We refuse to sit idle while Canada’s violent history is celebrated.”
Idle No More is encouraging communities to participate in sit-ins, round dances, ceremonies and other such events on July 1 in protest of the holiday.
Demonstrations, vigils and marches are planned in cities including Toronto, Vancouver, Edmonton and Montreal.

A number of local governments across the country have postponed Canada Day festivities this year, while some have called them off altogether.
In the province of British Columbia, Victoria and Penticton are among the cities halting celebrations out of respect for First Nations communities. The city of Kelowna, meanwhile, cited Covid-19 restrictions as reason for the change.
In Saskatchewan, at least three leaders “pressed pause” on the holiday and observed National Indigenous People’s Day on June 21. Communities in New Brunswick, Ontario and other provinces have canceled or altered Canada Day plans, too.
Other leaders are using the occasion to reflect on Canada’s fraught and complicated history.
The city of Pickering, Ontario, is “shifting the direction of Canada Day activities to focus on education, reconciliation and reflection,” Mayor Dave Ryan announced in a video. Pickering also plans to fly the Mississaugas of Scugog Island First Nations flag at half-mast alongside other flags until dawn on July 2.
“This Canada Day, we invite you to contemplate Canada and to take action,” Ryan added.
The city of Fredericton, New Brunswick, announced that “Canada Day will be a quiet time of reflection.”

National celebrations are so far going ahead

Prime Minister Justin Trudeau so far has not announced plans to cancel national Canada Day celebrations, the biggest of which occurs in the country’s capital of Ottawa.
Because of the Covid-19 pandemic, however, this year’s holiday programming is again taking place virtually.
Trudeau addressed the recent discovery of unmarked graves at a news conference last Friday, saying that this Canada Day would be a reflection on the country’s achievements, as well as the work that remains to be done.
“With Canada Day coming up next week, a lot of people I think will be reflecting on many different things,” Trudeau said at a news conference last week. “Reflecting on the really tough year, we just had with Covid-19, how much we lost, how much we learned, how much we’ve been there for each other through difficult times.”
He continued, “But at the same time, many, many Canadians will be reflecting on reconciliation, on our relationship with Indigenous peoples and how it has evolved and how it needs to continue to evolve rapidly.”
Erin O’Toole, leader of Canada’s main opposition Conservative Party, opposed calls to cancel Canada Day festivities, saying that the nation could admit its shortcomings while still celebrating and committing to do better.
“We are not a perfect country. No country is,” he wrote in a Facebook post. “We must acknowledge where we have fallen short. There is a difference between legitimate criticism and always choosing to run Canada down.”
Earlier this year, Canada designated September 30 as the National Day of Truth and Reconciliation to commemorate the history and legacy of the country’s residential school system.