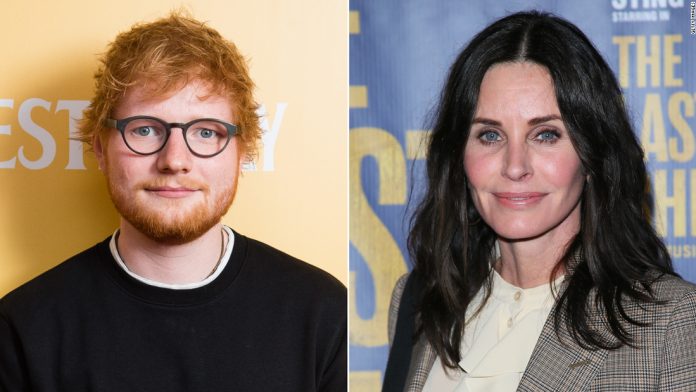 Sheeran revealed during an appearance on “The Late Late Show with James Corden” this week that he has repeatedly played the same prank on Cox, who he knows through Snow Patrol’s Johnny McDaid, Cox’s partner and a musical collaborator of Sheeran’s.
“She has this Alexa thing in her house, and she goes, ‘Yeah, this is wonderful. This is my Alexa. I can just order whatever on this,'” Sheeran said, revealing that he ordered an “S&M leather gimp mask” to her house.
“Unbeknownst to me, Courteney’s assistant found it,” Sheeran said. “She opened the post and she finds this mask and instantly goes, ‘Oh, I don’t think I was meant to see that’ and leaves it on Courteney’s bed. And Courteney comes up, and she’s like, ‘Where did this come from?'”
Now he keeps doing it.
“Anyway, she found out the story, and now every time I go back there, I order her another gimp mask. And she has maybe 12, and then, I hide them in people’s bedrooms. So they’ll go in a drawer, and they’ll just find this leather S&M mask,” Sheeran laughed. “And she had two people look at her piano to try and buy it, two absolute strangers going into her house that I found out about, so I left a couple of masks on the piano.”