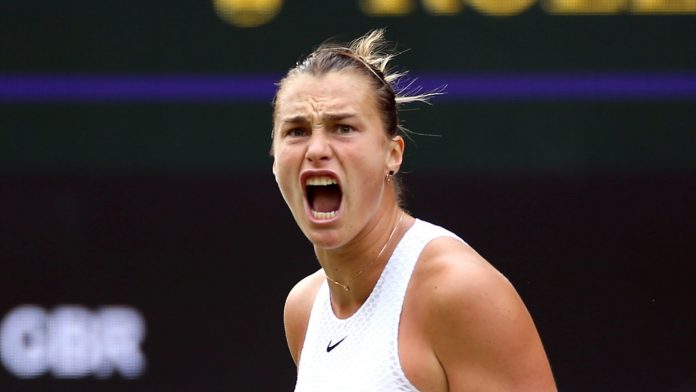 Aryna Sabalenka saw off Katie Boulter to reach the third round at Wimbledon, but only after Britain’s world no 219 had given the second seed a huge scare on a raucous Centre Court.

Boulter had lost in straight sets when she met Sabalenka in their first and only meeting at the 2019 Australian Open, but this time she was ready for her opponent’s power.

The 24-year-old from Leicester embraced the home support and delighted the crowd when she broke in the opening game of the match on her way to taking an impressive first set against her Belarusian opponent, who is ranked 215 players above her.

That one hurt. Thanks for all the support out there today 🥺💚💜 pic.twitter.com/a4DmwsqRow

However, Sabalenka showed her championship class by rallying with an early break in the second set to level the contest and the world No 4 from Minsk – who has two Grand Slam doubles titles on her CV – seized the advantage in the decider, again via an early break of serve.

Boulter stood firm and, after a medical time out on an already heavily strapped elbow, she had enough in the tank to break before Sabalenka eventually got across the line and into the third round at the All England Club for the first time.

“My first and only takeaway is that it’s definitely the best court in the world,” said Boulter, who is making her way back to full fitness following a stress fracture of her back.

“I’d not had a chance to play on it yet, that’s my first time, I absolutely loved every minute out there. The crowd were incredible. I thought it was a really good match, one I won’t forget.

“I obviously felt like I had quite a few break-points and didn’t manage to take them. I also didn’t feel like I gave them away, she had to win them. She won them. Certainly I’ve got no regrets about that at all.”

Britain’s other hopes on day three centred on Sam Murray Sharan and Emma Raducanu – at opposite ends of their careers.

Raducanu, the highly-rated 18-year-old making her Grand Slam debut after being given a wild card, was a brilliant 7-6 6-0 winner over experienced Russian Vitalia Diatchenko to book a second-round date with Marketa Vondrousova.

At the other end of the scale, 33-year-old Murray Sharan was playing in the main draw for the first time since 2014. However, she was unable to find a way past Romania’s Sorana Cirstea, who a 6-3 6-3 winner in their delayed first-round encounter.

After Serena Williams injury-hit exit on Tuesday night, older sister Venus was in action but 21st seed Ons Jabeur was too good for the five-time champion.

The pair exchanged in plenty of pre-match pleasantries with Jabeur – the first Arab woman to win a WTA title – revealing Williams has sought her out to congratulate her and the American effusive in her praise for the Tunisian inspiring a new generation.

However, there was little room for sentiment as Jabeur ran out a 7-5 6-0 winner to leave Williams waiting to return in the mixed doubles in a headline-grabbing partnership with Nick Kygrios.

Alize Cornet upset the former US Open champion, Bianca Andreescu, for the second time in two weeks by beating the fifth-seeded Canadian 6-2 6-1.

Andreescu went into the first-round clash playing just her second match at the All England Club and her first since 2017 – but she became the highest seed to exit – until fourth seed Sophia Kenin’s shock exit later in the day.

A run of eight successive games for Cornet at the end of the first set and into the second ultimately decided the encounter. Then, at match point, she finished proceedings with a stunning lob that Andreescu could do nothing about.

Andreescu is on her way back from injury woes, but American Kenin – seeded fourth and among the names expected to go well – crashed out in just 46 minutes.

Last year’s Australian Open champion, who also reached the French Open final, fired 41 unforced errors as she suffered a 6-2 6-4 defeat to fellow American and world no 82 Madison Brengle to once again ensure the women’s Grand Slams continues to produce shocks.

It was plain sailing for the majority of the higher-ranked players in action on the first rain-free day at Wimbledon. Sabalyenka was joined by last year’s French Open champion Iga Swiatek, who made short work of Vera Zvonareva.

French Open runner-up Anastasia Pavlyuchenkova cruised into the second round courtesy of her 6-2 6-2 win over Ana Bogdan.

Pavlyuchenkova took advantage of 16 unforced errors from Bogdan to win in under an hour, while two-time Grand Slam champion Victoria Azarenka is also through after a 6-1 6-3 win over Kateryna Kozlova

Elina Svitolina is yet to pick up a major singles title, and she finally got her campaign off and running with a three-set win over Belgium’s Alison Van Uytvanck.