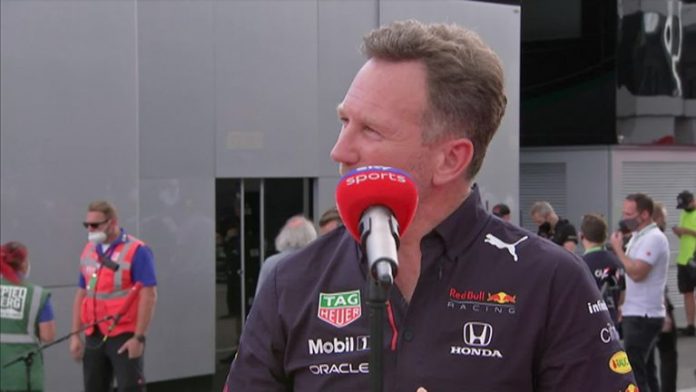 Red Bull’s Christian Horner believes their new powertrains division could end up supplying other F1 teams, with the team boss expressing his excitement for the team’s future as an engine and chassis builder.

Horner also detailed how Red Bull held “exploratory discussions” with Ferrari before deciding to take control of their own engine destiny from 2022.

After Honda leave the sport at the end of this season, Red Bull – F1’s current championship leaders – will take over the running of those engines heading into a planned three-year engine freeze in the sport with a new powertrains facility under construction at their base in Milton Keynes.

The team are then working on producing their own unit for the sport’s next era of engine rules from 2025. Mercedes, Ferrari and Renault are the sport’s other engine providers beyond this year.

Asked if could envisage that leading to Red Bull Powertrains supplying teams beyond sister outfit AlphaTauri in the future, Horner told F1’s Beyond the Grid podcast: “I don’t see why not because Red Bull will be the only independent manufacturer in Formula 1.

“Yes, it has to deal with the environmental issues, but there’s no pre-requisite set down from an OEM [Original Equipment Manufacturer] to say ‘this is what the engine has to be’.

“So I think it has been music to Stefano [Domenicali, F1 president] and Ross [Brawn]’s ears that suddenly they are not beholden just on the OEMs of the manufacturers.”

Honda announced last October their latest F1 stint would end at the end after seven seasons at the end of 2021, with Red Bull subsequently announcing in February they had secured a deal to take over the Japanese manufacturer’s product after the sport agreed a cost-saving engine freeze from next year.

Since announcing their F1 exit and developing a new engine for 2021, Honda have powered to four wins from eight races this season with Red Bull leading Mercedes in the chase for both world titles.

“I think they are loving it,” Horner said about Honda’s feelings on this season so far. “They have made their decision, they are withdrawing officially at the end of the year, and it’s a great, great shame.

“We would have loved them to stay longer, we are just about to go under a freeze for the next three years so costs are far more controlled. They have worked very hard to get themselves in a competitive position.

“Certainly next year we’re aiming to sustain some form of relationship.

“I’m obviously not going to go into the details of the discussions but we’re aiming to have a softer lander as we can as it’s an enormous challenge to start from scratch as an engine builder.”

The Red Bull chief also recalled the progress that led to them ultimately taking the “big and bold step” to go it alone at the start of this year.

“The most natural thing was to have a discussion with the existing suppliers,” recounted Horner. “Mercedes was a very short conversation and Toto [Wolff] obviously wasn’t particularly keen on that one.

“In fact, Renault, their aspirations as a team didn’t include supplying a team like Red Bull. Probably the most willing was Ferrari.

“And, you know, we had some exploratory discussions but to be a customer, so to have to accept all the integration particularly with the new regulations that are coming, would be a massively hard pill to swallow, so that’s when we started to explore the possibility: ok, how do we take on this challenge in a Red Bull manner and see if we can put a deal together with Honda for the foreseeable future?

“The freeze was fundamental for that because we wouldn’t have the capacity to develop an engine.”

Having lured numerous staff from rival Mercedes’ multiple-championship-winning engine division in nearby Brixworth to join their new project, Horner believes the company is fired up for what lies ahead.

“We have got such strength in depth in the organisation that we are ready for this challenge,” he added. “It’s an exciting challenge and one that has been fully embraced.

“Adrian [Newey] is excited about it. Pierre Waché [Red Bull technical director] gets to work side-by-side with the technical director of the powertrains in Ben Hodgkinson who will be joining us. It’s really exciting.

“And, of course, we are going to inherit over 100 people from HRD [Honda R&D] UK. The engines are operated out of Milton Keynes in the UK from Honda and all those talented people that are here at the track running and operating these engines will transfer across to becoming Red Bull employees.”