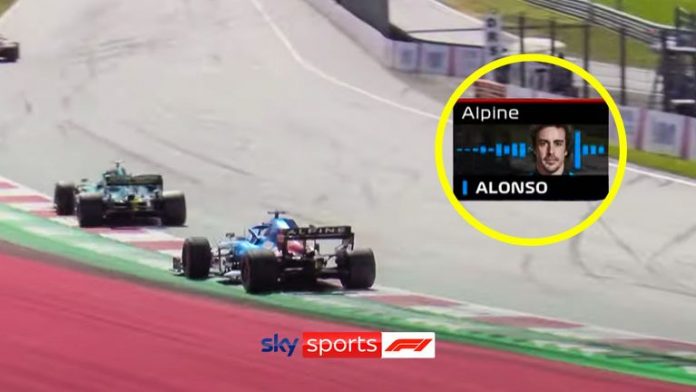 “Now I guess we will not score points tomorrow so whatever they give to the others is never enough. It’s the way it is; it was very badly managed by the people in front,” says Alonso with Vettel, Bottas and Sainz all with the Austrian GP stewards after qualifying

An angry Fernando Alonso demanded harsher penalties for blocking in qualifying after saying his Austrian GP was effectively “over” amid fresh controversy over F1 drivers’ so-called ‘gentlemen’s agreement’.

Aston Martin’s Sebastian Vettel is under investigation by stewards and appears to face a likely grid penalty for Sunday’s race from eighth place after getting in the way of Alonso’s Alpine at the end of the Spaniard’s final Q2 lap.

But Vettel said others caused the problem by overtaking him in a queue at the end of the lap, while Alonso did not directly blame his old title rival either.

Mercedes’ Valtteri Bottas and Ferrari’s Carlos Sainz have also been called to the stewards for driving “allegedly unnecessarily slowly in the entry of turn 9 and turn 10” in the build-up to the final laps of Q2.

Flying along in qualifying after setting the third-quickest time in Q1, Alonso was attempting to secure a berth for Q3 when he encountered his old rival going slowly into the final corner as the Aston Martin prepared for a hot lap.

Alonso ended up 14th and swore over the radio, adding: “I cannot believe it.” He then waved his hand towards Vettel at the start of the next lap, with the German holding up his hand to apologise.

“I think we lost our opportunity to be P5, P6 on the grid and a different race,” said the Spaniard to Sky F1’s Rachel Brookes.

“Now I guess we will not score points tomorrow so whatever they give to the others is never enough. It’s the way it is; it was very badly managed by the people in front.

“Disappointed because we had the potential today, it was probably our best car of the season in qualifying, and we didn’t maximise it.”

Vettel felt the issue had been triggered by other drivers overtaking him to gain track position for themselves rather, as has supposedly been agreed by drivers, following each other in a queue for their respective turn to push.

Of a queuing situation that continues to cause controversy, Alonso added: “It’s very confusing. It has to be common sense, it has to be harsh penalties because it’s not right what happened today.

“Very frustrating to lose a lot of points tomorrow. Now we have a race that we can forget starting 14th. It’s over.”