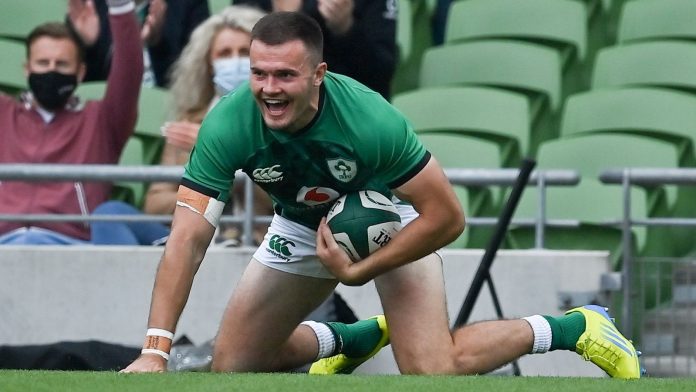 Recap Saturday’s Test rugby action outside of the Lions as Ireland, Wales and New Zealand registered wins over Japan, Canada and Tonga…

Ireland shrugged off the absence of several senior personnel to edge out Japan 39-31 in a fluctuating summer Test as supporters returned to the Aviva Stadium for the first time in 17 months.

With seven of their contingent on British and Irish Lions duty, would-be Lion Andrew Porter injured, and captain Johnny Sexton, Keith Earls and Cian Healy rested, there was a fresh look to the hosts in their first meeting against Japan since the 2019 World Cup.

On that occasion, Japan pulled off a shock in the pool stages and they threatened a repeat in Dublin, where around 3,000 spectators were in attendance at the venue for the first time since February last year.

It was a lacklustre and error-strewn first half from the Irish but they went in at the interval 19-17 ahead courtesy of tries from centre pairing Chris Farrell and Stuart McCloskey and tighthead prop Finlay Bealham.

Flanker Josh Van Der Flier and wing Jacob Stockdale went over after the break while Joey Carbery’s four conversions were followed by two penalties that ultimately took the wind out of the sails of Japan, whose tries came from Michael Leitch, Timothy Lafaele, Siosaia Fifita and Naoto Saito, with Yu Tamura adding 11 points with the boot.

While they led on several occasions, including a 24-19 advantage in the second half, Japan were ultimately left to reflect on a successive losses, having been beaten by Warren Gatland’s Lions 28-10 at Edinburgh last weekend.

Wales welcomed fans back to the Principality Stadium in style as their launched their summer international series with a 68-12 victory over Canada.

A good day out in @principalitysta with plenty of tries, debuts and singing 🎶

Good luck with the rest of the campaign, @RugbyCanada 🇨🇦

The Guinness Six Nations champions ran in 10 tries, although victory came at a cost after full-back Leigh Halfpenny’s 100th Test for Wales and the British and Irish Lions lasted just two minutes before he was carried off injured.

Halfpenny suffered a suspected knee ligament problem, being hurt when he appeared to slip after going into a challenge on the halfway line.

Ongoing restrictions meant the capacity was set at 8,200, and 6,164 spectators were a welcome sight for head coach Wayne Pivac and his players as Wales returned to action following their Six Nations title triumph 14 weeks ago.

It was a first home crowd since February last year, and Wales delivered as they took charge through first-half tries from Tomos Williams, Jonah Holmes, Nicky Smith, Elliot Dee, James Botham and Will Rowlands.

Williams added his second try early in the second half, and there was also a double for Taine Basham in his first Test and Holmes also claimed a brace, while fly-half Callum Sheedy kicked seven conversions and Ben Thomas added the extras following second scores for Basham and Holmes.

Earlier on Saturday, the All Blacks opened their 2021 season in an unseemly cakewalk, beating a weakened Tonga team 102-0 in a match that was a Test in name only.

New Zealand scored 16 tries, five to wing Will Jordan, three to scrum-half Brad Weber and two to flanker Dalton Papalii. Wing George Bridge crossed Tonga’s line in the 82nd minute for the try that brought up an All Blacks century.

Tonga were far from full strength, missing players based in France, Britain and Japan. They chose not to endure the long trip to New Zealand or were not allowed to do so by their clubs. In their absence, Tonga had to call on semi-professionals from New Zealand’s lower-tier provinces and even some from entirely amateur club teams to assemble a squad.