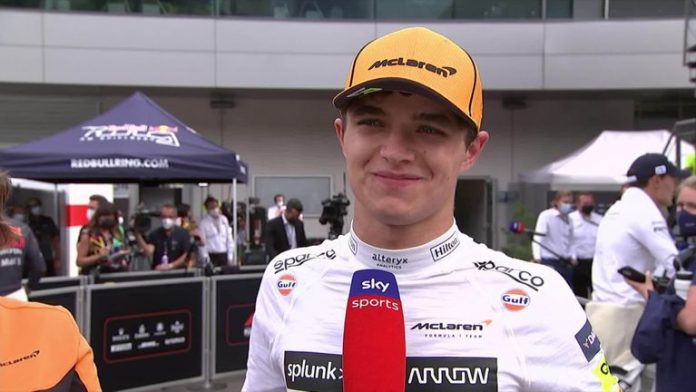 Lando Norris caps superb fortnight at the Red Bull Ring by claiming his first podium finish of a stellar season; But the McLaren driver left questioning the stewards’ decision to penalise him for wheel-to-wheel duel with Sergio Perez

Lando Norris felt his five-second penalty for an early clash with Red Bull’s Sergio Perez was harsh, and potentially cost him a second-place finish

Lando Norris was hailed as a “great driver” by Lewis Hamilton and took the plaudits of the pundits after capping a starring role at the Austrian Grand Prix with a third-place podium finish.

But the McLaren driver still finished Sunday’s race with mixed emotions as he questioned whether the time penalty imposed on him by stewards for an early incident with Sergio Perez was justified, after it likely cost him a career-best second place.

In the latest chapter of a superb season, in which Norris remains the only driver to score points at every race and sits fourth in the world championship, the 21-year-old held his own against the Mercedes drivers behind the runaway Max Verstappen and finished between Valtteri Bottas and Hamilton for the fourth third-place finish of his short career.

Norris had already surprisingly outqualified the Mercedes cars and Red Bull’s Sergio Perez on Saturday for his first front-row start at the top level, and McLaren’s first in nine years.

Enjoying a sensational Austrian weekend, the Englishman even drew praise from his seven-time title-winning compatriot during the course of Sunday’s race.

Having followed Norris through the first 20 laps before overtaking, Hamilton told his Mercedes team over the radio: “Such a great driver, Lando.”

Describing Norris as “absolutely a future world champion”, Paul Di Resta said: “People always ask if a driver overdriving their car is possible. Well, I would say he got the maximum out of his car this weekend.

“Absolutely superb from qualifying, carrying that into the race.

“He was pushing Bottas all the way to the end and without that penalty, which I think was quite harsh on him, he would have been P2 on merit.”

But should Lando’s third have been second?

Sergio Perez ends up in the gravel and drops down to 10th after this incident with Lando Norris, who later picked up a five-second time penalty

Norris himself felt he had been hard done by in the stewards ruling that he had not given Perez sufficient room in their lap-four tussle and so forced the Red Bull off the track.

Serving the five-second penalty before McLaren’s crew started work on his car at his first pit stop, Norris slipped behind Bottas as a result although he regained one place when Hamilton’s pace slowed with car damage.

But, in a case of what might have been, Norris ended up finishing the race only two seconds behind Bottas.

“You understeer around the corner anyway, he should have expected he wasn’t going to make it. I don’t know, I’m just annoyed because it cost us P2.

“Hamilton had a problem but we had the pace to be ahead of Bottas at least, especially in the second stint. Would have liked to be second and not third again, just cementing myself a bit more, so just a bit annoyed about that.

“It’s lap one [after the restart], people are racing, and he’s tried something that hasn’t worked. His fault not mine.”

In addition to the time penalty, Norris also had two further penalty points applied to his superlicence – taking him up to 10 in total.

Drivers who reach 12 points over a rolling 12-month period face an automatic race ban, although the first two points collected by Norris, from last year’s Styrian GP (July 12, 2020), fall off his licence before he competes again at the British GP on July 16. He will therefore arrive at Silverstone back on eight licence points.